TOKYO — A familiar battle is unfolding here between a local governor trying to close down all businesses to contain COVID-19 and a central government hoping to minimize the economic impact.

Just as U.S. President Donald Trump and New York Gov. Andrew Cuomo have been trading barbs over airwaves over just how much of the society to shut down, Japanese Prime Minister Shinzo Abe and Tokyo Gov. Yuriko Koike are wrangling over the extent of business restrictions.

In a teleconference Wednesday morning with officials from Tokyo, Osaka and the five other affected prefectures, Yasutoshi Nishimura, the economic policy minister who is spearheading the nation’s coronavirus response, tried to dissuade them from seeking extensive business closures.

“We consider hair salons and home-improvement stores to be essential to daily life,” said Nishimura, bringing up specific business categories.

This followed Abe’s news conference Tuesday night announcing that hair salons and barbershops would stay open. He also called for restaurants to take precautionary measures, such as improving ventilation, instead of closing their doors.

They were specifically taking aim at Koike’s reported plans to request the closure of a wide range of facilities. The clash leaves business owners and local authorities in limbo at a critical time for dealing with the outbreak.

Tokyo Gov. Yuriko Koike, left, meets with Prime Minister Shinzo Abe, asking him to implement emergency measures to limit the spread of the coronavirus in the capital.

The legislation Abe used to declare a state of emergency gives prefectural governors the authority to decide what should close. Tokyo had drawn up an extensive list in anticipation of the decree, which included all entertainment and commercial facilities bigger than 100 sq. meters, in a bid to discourage large gatherings. Department stores and universities would be directed to shutter as well.

But the central government got wind of this plan and moved to head it off. Shortly before the emergency decree Tuesday night, Tokyo and six other prefectures were asked to wait to see whether the stay-at-home requests work to curb the spread of the virus before taking the extra step of closing businesses.

The government amended its guidelines on handling the outbreak to say much the same thing. It also attached an addendum listing “businesses asked to continue operating in the event of an emergency declaration,” including restaurants, cafes, department stores and supermarkets.

Nishimura asked Tokyo on Tuesday to postpone business shutdowns for two weeks. The capital opted against announcing closures Tuesday night after the emergency decree but now looks to do so Friday.

Local authorities are not legally required to follow the guidelines, but it will be difficult to mount an effective response if the two levels of government do not cooperate.

There is concern about potential repercussions beyond Tokyo if the capital restricts business activity too heavily. “If jobs disappear and stores close in Tokyo, more people will go back” to family elsewhere in the country, a senior government official said. That would create more opportunities for the virus to spread beyond the city. 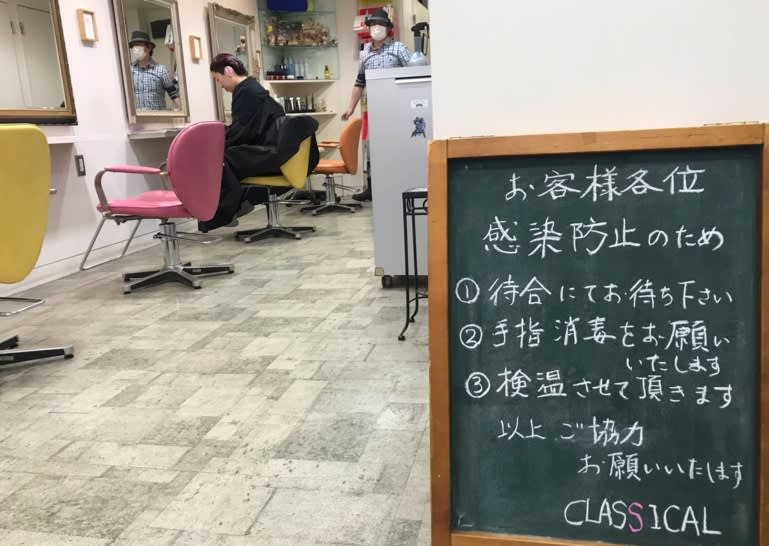 The central government is trying to keep hair salons open as essential businesses.

Similarly, if it becomes too difficult to buy food and everyday necessities, Tokyoites may travel to surrounding towns or even farther out. Students and part-time workers could choose to return home.

Abe and Chief Cabinet Secretary Yoshihide Suga also worried about the potential economic damage if shutdowns leave small businesses and the self-employed struggling to stay afloat. Even before the emergency declaration, Tokyo restaurants have sought millions of dollars in loans in April alone.

Tokyo generates about a fifth of Japan’s gross domestic product. If economic activity grinds to a standstill there, the country as a whole could suffer.

In a central government meeting before the emergency declaration, the argument was raised that leaving everything up to local authorities would lead to cities trying to one-up each other with tough restrictions for fear of being criticized later for not doing enough.

Whether voluntary measures will suffice remains unclear. Traffic and train ridership in Tokyo have fallen amid a work-from-home push, but the decline remains well short of the central government’s social-distancing target of 80%.

Osaka has indicated it will follow the government’s lead and refrain from closing businesses at this time. “For now, we have followed the national guidelines,” Gov. Hirofumi Yoshimura said Tuesday.