BUSAN, South Korea — At a factory on the western edge of Busan, Lee Sun-do’s worries are literally piling up.

In an outdoor storage lot, stacks of barrels containing industrial lubricants wait to be loaded onto trucks, driven to the South Korean city’s massive international port and shipped overseas.

Lee, chief executive officer of Zeus Oil & Chemicals, isn’t sure how long the barrels will be there. Like many in this city of 3.46 million people, his economic fortunes have been thrown into disarray by the coronavirus pandemic.

“In March, when the corona situation was really bad in Korea, a lot of buyers in the U.S. and Europe increased their orders, anticipating a shutdown. We scrambled to produce more, now exports are blocked and we can’t get rid of them,” he told the Nikkei Asian Review.

He fears the worst is still to come. With the economy mostly shut down in the U.S., a major export market, Lee doesn’t expect orders to pick up until late summer at the earliest. Domestically, many clients are facing cash crunches that leave them unable to place new orders, or even pay for previous orders.

Lee’s company has its own bills to pay and is bracing for the worst. “We are all asking for leniency in delaying payments because we know the real crisis hasn’t even started yet,” Lee said.

Busan, a hub of shipping and manufacturing, is South Korea’s second largest city in terms of both population and economic activity. Despite government efforts to support industry, the city has recorded tepid growth in recent years, with gross regional domestic product expanding 1.5% in 2018, down from 1.6% the previous year and 1.7% in 2016.

The jitters in Busan underscore the export-led South Korean economy’s vulnerability to global turmoil, and highlight the country’s struggle to find models that can maintain growth outside the capital area, where the conglomerates that dominate the economy are headquartered.

The country’s reliance on exports was underscored on Monday, when data showed shipments overseas in the first ten days of May fell 46.3% from a year earlier. This means that Busan, home to vulnerable industries such as shipping and tourism, is also poised to take a particularly severe hit from the coronavirus pandemic.

A recent report by the Busan office of the Bank of Korea concluded that the region is likely on the cusp of the most significant downturn since the foreign exchange crisis of 1997-98. Manufacturers have experienced delays in procuring parts from China, and due to resultant slowdowns in key industries such as autos, steel and machinery manufacturing, the area is likely to face a long road to recovery.

Despite an effective government response to the coronavirus, the pandemic has weighed down an already-struggling economy, with tourism and retail sectors being hit especially hard. The country’s statistics agency announced that 195,000 jobs were lost in March nationwide, with restaurants and small retailers sustaining much of the damage. In Busan’s commercial core, in the shadow of skyscrapers occupied by shipping firms and travel agencies, is the 40 Stairs, a landmark that testifies to the city’s historically strategic location. During and after during the 1950-53 Korean War, the stairs were a meeting point for families scattered by the conflict to look for lost relatives and work opportunities.

A monument describes the stairs as “a scene of the frustrated lives of refugees,” and details how a community of shantytowns mushroomed around the stairs in the postwar years, planting the seeds for the concrete and glass area that stands today.

In a nearby office tower, Y.S. Hwang, managing director of the Busan office of the Korea Shipowners’ Association, says that the port’s passenger traffic is down to zero, and shipments of freight have declined in recent months.

“If consumption falls and factories close in some other part of the world, that affects our businesses, and there’s really nothing we can do about it besides try to reduce our costs and operate more efficiently,” Hwang told Nikkei in an interview at his office.

In April, President Moon Jae-in’s Democratic Party scored a decisive victory in legislative elections, the most significant gauge of Moon’s performance since he took office in May 2017. Analysts attributed the ruling party’s triumph mostly to South Korea’s successful handling of what at one point was the largest coronavirus outbreak outside of China, stopping spread of the virus without a comprehensive lockdown of the country.

The virus response distracted voters from the issue of the economy, which had been set to dominate the vote, analysts said.

Despite dominating most of the country, the ruling Democrats won only three of 18 seats contested in Busan, albeit a traditionally conservative area. Busan was one of few areas in the country where Moon’s party lost ground, with the poor showing generally attributed to the waning local economy.

Moon’s party will face its next major electoral test with the presidential election in 2022.

Over the rest of his single five-year term, Moon will try to leverage his party’s comfortable majority in the legislature to spur sustainable growth while containing the economic fallout of the pandemic.

His administration has announced stimulus spending and assistance for households and small businesses. 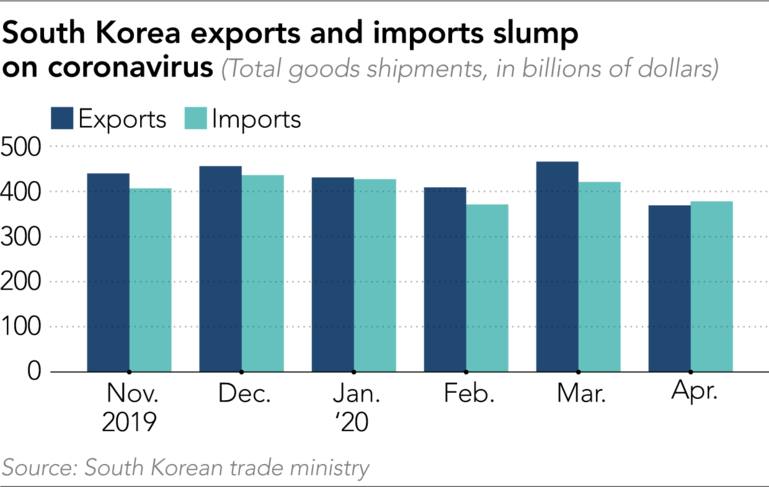 Critics of Moon’s approach argue that the government ought to invest in a more long-term vision. “In trying to revitalize economies in places like Busan, the Moon government’s approach has been too focused on handing out short-term cash payments,” said Shin Se-don, a professor of economics at Sookmyung Women’s University in Seoul.

“The government needs a more ambitious strategy to support existing industries, like automobiles and shipbuilding, by investing in new, much more high-tech machinery that will boost those industries’ competitiveness.”

Tourism is another mainstay industry in Busan. The city has a scenic coastline and beaches that attract massive crowds in the summer. As South Korean and international travelers have stayed home due to COVID-19 social distancing campaigns, businesses that rely on tourists have seen huge drops in revenue.

“In March and April, our sales were zero and we have no reservations for May. To stay in business, we need active support from the government,” said Chung Kim, a representative from Busan Tourism Center, a travel agency and operator of boat tours around Busan.

But as South Korea’s social distancing campaign eases and the number of COVID-19 cases remains low, there is a chance the sector could rebound in time for the summer vacation season.

“Now that domestic tourism is the only option, we could see a revival in the sector starting in late May or the second half of this year,” said Jeong Ran-soo, a professor in the Department of Tourism at Hanyang University.

As the pandemic drags on, many in the hospitality sector worry over the possibility of permanent changes in consumption habits.

Lee Jang-soo, who has run a fish restaurant in Busan for more than 20 years, said his sales have been down by half since March.

“We depend on company dinners and other big gatherings, and that’s exactly the kind of thing people are foregoing now,” Lee said on a recent evening when his restaurant had only two groups of diners in private rooms.

“All we can do is wait and hope that things get better,” Lee said.