TOKYO/GUANGZHOU — Slumping economic activity caused by the coronavirus is pushing down inflation in China and elsewhere.

While China and many other countries have reopened their economies and factories after lockdowns to contain the spread of the disease, fears of a second wave of infections could continue to put downward pressure on consumption.

“The customers are coming back but the numbers are half of what they used to be,” a sales clerk working at a department store in Guangzhou told Nikkei on Friday. Although the country saw 150 million domestic travelers during the May Day holidays, five days from May 1, the number of travelers was only half compared to the previous year.

In China, factories making cars and other products have resumed operations at full capacity after a lockdown centered on Wuhan, the initial epicenter of the coronavirus outbreak, was lifted on April 8. Consumption of coal for power generation at the country’s six major utilities — an indicator of production output in the country — was at nearly 60% of the five-year average in February, but has now almost returned to normal levels.

But household consumption has remained sluggish. In China’s four big cities, sales of goods for the home — an important indicator of household consumption as they cover diverse items including appliances, furniture and curtains — are about 70% of the five-year average. Home sales were barely comparable to the five-year average, even during the May Day holiday in early May, when demand is usually high.

“In China, prices of services have also remained sluggish and thus it is unlikely inflationary pressure will increase,” said Toru Nishihama, chief economist at the Economic Research Department of Japan’s Dai-ichi Life Research Institute. “Concerns over ‘disinflation’ — in which inflation rates remain stagnant — are growing again,” he added.

The coronavirus could work both ways, and there is some debate as to whether it will cause inflation or deflation in the long run. The evidence from China so far suggests the latter.

Inflation in other countries is also falling. As of April, the International Monetary Fund predicted that inflation would slow down in many countries, according to its global economic outlook. The IMF expects prices to start falling in countries like Spain, Switzerland and Thailand. The inflation rate is likely to slow to the range of 0%, even in the U.S. where inflation rate had remained at 2% thanks to booming economic activity. 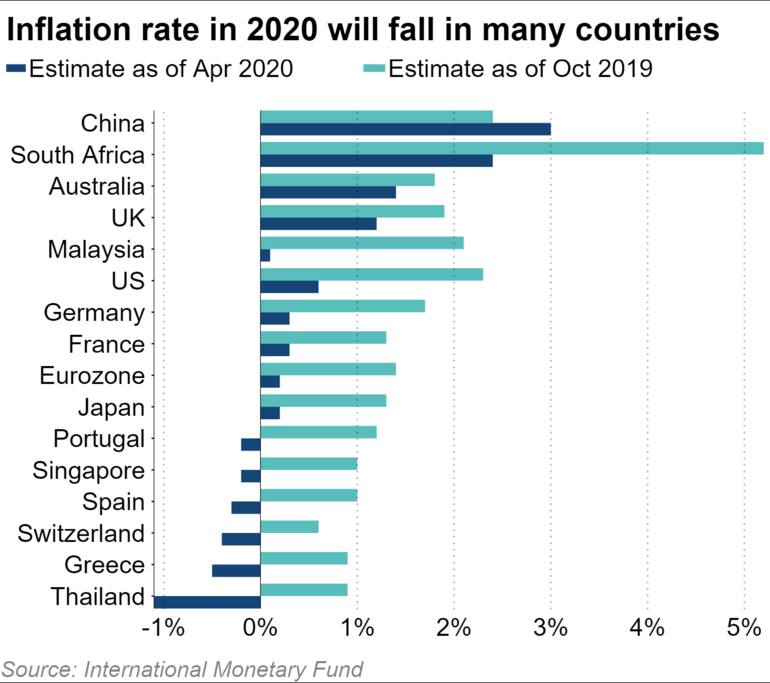 In April, the U.S. consumer price index dropped 0.3% from a year earlier, dragged down by a decline in accommodation fees and airfares. The country’s seasonally adjusted CPI fell 0.4% from the previous month, excluding food and energy prices — the biggest fall since statistics began in 1957.

Yoshimasa Maruyama, chief economist at SMBC Nikko Securities, expects that even the U.S. could fall into deflation. According to Maruyama’s calculation based on an inflation swap” — a derivative that trades inflation-linked bond yields and fixed rate bond yields — financial markets expect inflation rates in Europe and the U.S. will fall into negative territory over the next 12 months. 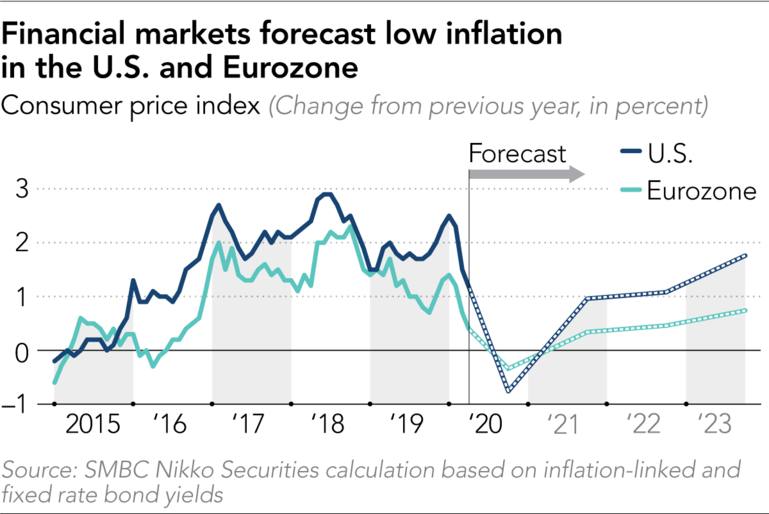 Even the U.S., the growth engine of the world economy, could fall into deflation akin to Japan’s “two lost decades” — the long period of economic stagnation after its asset price bubble collapse in the early 1990s.

Under deflationary conditions, people forgo present consumption in expectation that prices will fall further. Even if central banks slash interest rates, falling prices will not reduce the burden on companies and lead to a decline in capital spending.

Unless quick and continuous policy measures are taken, a new normal caused by the coronavirus could lead to deflation around the world.