KARACHI — The novel coronavirus is spreading faster in Pakistan than almost anywhere else in the world, yet most people do not take the pandemic seriously due to misinformation and conspiracy theories surrounding the virus.

As of June 12, the total number of COVID-19 cases in Pakistan had reached 125,933. Infections have risen by more than 500% over the last week. But despite the alarming numbers, the government has relaxed lockdowns across the country and has even decided to reopen the tourism industry.

But the authorities have declined to act on the WHO recommendations. Zafar Mirza, special assistant to the prime minister for health, said that the recommendations are not mandatory and that the government must take economic as well as health considerations into account.

Experts believe the government inaction is driven by the large slice of the population that does not take the coronavirus seriously due to conspiracy theories rampant on social media.

In April, for example, Tariq Jameel, Pakistan’s most famous televangelist, claimed the coronavirus is a sign of God’s wrath over such sins as women dancing and dressing immodestly. Another fanciful notion is that the coronavirus is part of China’s master plan for world dominance. Because Pakistan is China’s ally, the thinking goes, it will not be affected. Bill Gates, Microsoft’s founder and a philanthropist who has devoted a large chunk of his wealth to health issues, is accused of spreading the virus so he can make a fortune selling vaccines.

According to a poll conducted by Ipsos, a global market research and public opinion specialist, only 3% of Pakistanis have no misconceptions about the coronavirus — how it is spread and methods for its prevention and treatment. The same poll revealed that a third of respondents believe in conspiracy theories related to the pandemic.

Although a number of these theories are believed around the world, experts say Pakistan’s unique circumstances and culture make it a more receptive market than most for such ideas.

Malik Siraj Akbar, a South Asia analyst based in Washington, says conspiracy theories have always been widespread in Pakistan. “Some people are agitated over [these theories] now only because of the seriousness of the coronavirus pandemic,” Akbar told Nikkei Asian Review, adding, “A country like Pakistan, with inadequate resources and the enormous challenge of COVID-19, cannot afford to ignore science.” 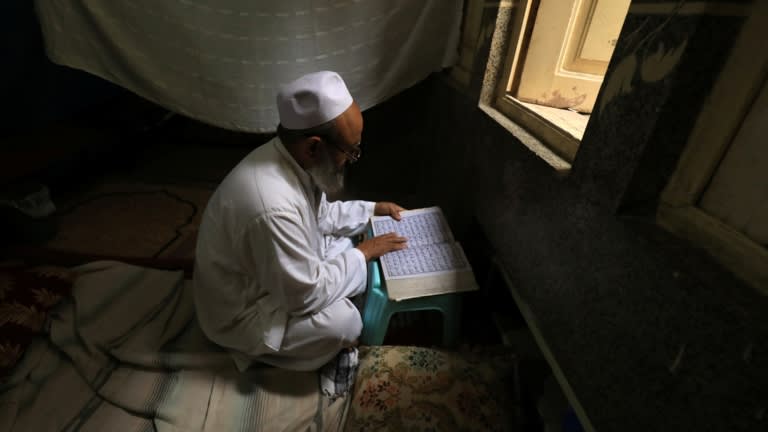 A man reads the Quran at a mosque in Peshawar, Pakistan: Devout Muslims have continued to gather in mosques despite the growing prevalence of the coronavirus.

Akbar complains that Prime Minister Imran Khan appears to put more stock in fiction and religion than in science. In a televised address in March, Khan said: “Ninety percent of coronavirus cases are normal flu, and clear up without any treatment.”

Khan’s approach to the disease is very subjective, and based on his own fears and assumptions. He does not pay much attention to experts regarding the many lives a lockdown would save, Akbar says.

Another unique aspect of Pakistani society is that even well-educated people, including some doctors, spread COVID-19 conspiracy theories. As a result, laypeople are easily taken in because they have been shared by “experts.”

Multiple doctors, for example, have suggested that senna leaves, a local herb, can treat the virus. As result, people have started using them in huge numbers, but there is no scientific evidence to support its effectiveness.

Shahzada Zulfiqar, president of Pakistan Federal Union of Journalists, believes a combination of illiteracy and religious conservatism fuels conspiracy theories. “Most of the experts and medical doctors who peddle conspiracy theories are inspired by religious dogmas,” he told Nikkei Asian Review.

Pakistan’s closed society and proximity to Afghanistan adds a religious dimension to the conspiracy theories. “Based on the experiences of the recent past with respect to conspiracy theories on polio, we know that this kind of misinformation can have devastating consequences on the public health sector,” said Akbar. The decadeslong polio vaccination campaign in Pakistan was previously derailed by attacks on the health workers fueled by the belief that the drops cause sterility in children. Members of the Pakistan Medical Association speak at a news conference on April 22 in Karachi,  asking government officials and religious scholars to back a strict lockdown.

Experts also blame the government for not debunking ill-founded claims. The general lack of trust in the government makes people more open to conspiracy theories.

Krzysztof Iwanek, head of the Asia Research Centre at the War Studies University in Warsaw, says the spread of conspiracy theories is fostered by the government’s lack of effort in combatting them. “The gaps in these [efforts] probably lead to Pakistan being affected [by the coronavirus] more than some other countries,” Iwanek told Nikkei.

Experts also blame some in the Pakistani media for telling tall tales about the coronavirus. “The Urdu press has contributed to sending mixed and confusing messages, since it is dominated by the religious right,” Akbar said. As a consequence, the coronavirus has been presented as a “science versus Islam” or “East versus West’ issue in Pakistan. The media has given people with religious motivations a reason to believe in conspiracy theories, Akbar believes.