Global cases have reached 5,495,061, according to Johns Hopkins University.

2:30 p.m. India’s Glenmark Pharmaceuticals will begin a clinical trial to test a combination of two anti-viral drugs — favipiravir and umifenovir — as a COVID-19 treatment. The study hopes to enlist 158 moderately infected patients currently hospitalized in India with the disease.

12:30 p.m. Japan gives up on obtaining approval this month for Fujifilm Holdings’ flu drug Avigan to treat coronavirus patients. “We will continue clinical studies and clinical tests in June and onward. There is no change in our policy of approving the drug swiftly, if its efficacy is confirmed,” the country’s health minister says.

11:50 p.m. Vietnam received $6.7 billion in foreign direct investment in the first five months of 2020, down 8.2% from a year earlier, the Ministry of Planning and Investment says. As the pandemic has slowed the global economy, FDI pledges — which indicate the size of future FDI disbursements — fell 17% in the January-May period from a year earlier to $13.89 billion.

11:23 a.m. Karaoke bars, nightclubs, party rooms and public baths in Hong Kong will reopen on Friday as the city has largely stamped out local infections, with no new cases in the past 11 days. Hong Kong International Airport will resume transit services on Monday.

10:23 a.m. South Korea confirms 19 new cases, up from 16 a day ago. Total infections reach 11,225 with 269 deaths. Transportation operators today can start declining to board passengers with no masks.

9:50 a.m. China reports seven new coronavirus cases as of the end of Monday, down from 11 a day earlier. All of the new infections are among overseas travelers. Authorities also report 29 new asymptomatic cases versus 40 a day earlier.

9:20 a.m. Singapore downgrades its growth projection for this year to a range of -7% to -4%, from the previous -4% to -1%, suggesting prolonged economic damage from the pandemic despite the phased resumption of business starting next week.

6:00 a.m. Japanese Prime Minister Shinzo Abe came down on the side of the economy when the government decided to lift the state of emergency for Tokyo and four other areas on Monday, sources say. Care was taken to avoid giving appearances of an arbitrary decision.

3:04 a.m. Dominic Cummings, a senior adviser to U.K. Prime Minister Boris Johnson, says he will not resign and does not regret driving over 400km in Britain during the country’s coronavirus lockdown. Cummings, whose trip to a family home has put Johnson under fire, says he was doing what was best for his children. WHO Director-General Tedros Adhanom Ghebreyesus says the organization is halting studies of hydroxychloroquine as a COVID-19 treatment due to safety concerns.

1:20 a.m. German airline Lufthansa has announced 9 billion euro ($9.8 billion) in aid to ride out the coronavirus pandemic. The lifeline will leave the German government with a 20% stake in the carrier.

12:08 a.m. Spain has made Nissan Motor a proposal designed to prevent the closure of the automaker’s plant near Barcelona, the government says.

11:27 p.m. McDonald’s will from Tuesday gradually restart in-store dining at around 1,000 restaurants in Tokyo and other parts of Japan following the government’s decision to lift a coronavirus state of emergency nationwide.

8:40 p.m. Hong Kong-listed Meituan Dianping reports a revenue decrease of 12.6% on the year for the January-March quarter, as the pandemic wreaked havoc on its food delivery and ticketing businesses. In a financial filing, China’s third-largest internet company by market cap — after only Alibaba Group Holding and Tencent Holdings — also logs a 1.7 billion yuan ($240 million) operating loss for the first quarter, versus a 1.3 billion yuan loss for the same period last year.

8:37 p.m. Japan’s professional baseball season will start June 19, with no fans in the stands for the foreseeable future, officials say.

7:25 p.m. Kazakhstan tightens lockdown measures at its largest gas condensate field, Karachaganak, where a worker was found to be infected with the virus late last week, according to Reuters.

6:00 p.m. Japanese biotech venture AnGes is set to begin a clinical trial of a coronavirus vaccine in July, Nikkei learns, raising hopes that the medication could secure government approval by the end of the year. Unlike standard vaccines, which use live or inactivated pathogens to generate an immune response, DNA vaccines use a genetic sequence that causes cells within the body to produce an antigen for the virus. 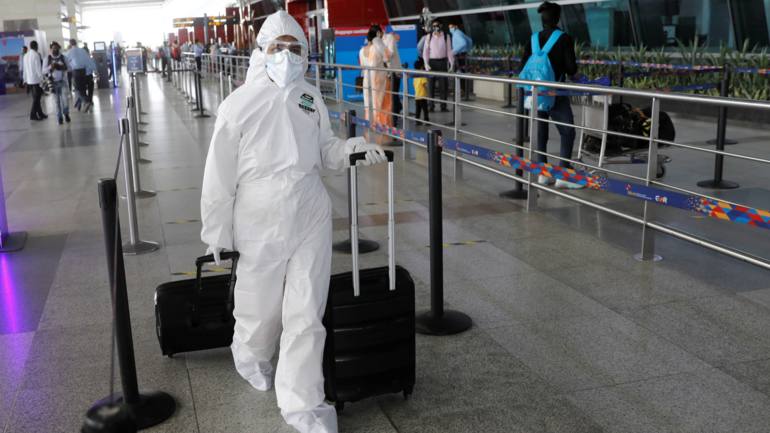 A traveler walks through Indira Gandhi International airport in New Delhi after the government allowed domestic flight services to resume on May 25.

4:40 p.m. India reports 6,977 new cases, bringing the country total to 138,845 and overtaking Iran to become one of the 10 worst-hit nations. The figure represents the biggest single-day jump in new cases, despite the world’s longest lockdown imposed in March, even as the government allows domestic air travel to restart.

3:00 p.m. Tokyo stocks advance as the government prepares to end the state of emergency in Tokyo and all other areas, raising hopes that the economy may soon start recovering. The benchmark Nikkei average rose 1.7% to 20,741.65, its best finish since March 6, with air and land transport shares leading the rally.

2:45 p.m. Japan’s Mitsubishi Heavy Industries will close two of its three offices for SpaceJet aircraft subsidiary Mitsubishi Aircraft in North America, plans that are likely to affect a few hundred jobs, Nikkei has learned. Mitsubishi’s SpaceJet program was hit by demand uncertainties as the novel coronavirus swept the world.

2:00 p.m. Thailand reports two new cases and one death, bringing the country total to 3,042 cases and to 57 deaths since the outbreak began in January.

12:30 a.m. China’s central bank lowers the midpoint on its trading range for the yuan to 7.1209 to the dollar, its lowest point since the 2008 global financial crisis, reflecting losses in the spot yuan market on Friday after Beijing proposed a new national security law for Hong Kong. The confrontation between the U.S. and China over Beijing’s handling of the coronavirus outbreak has added uncertainty. 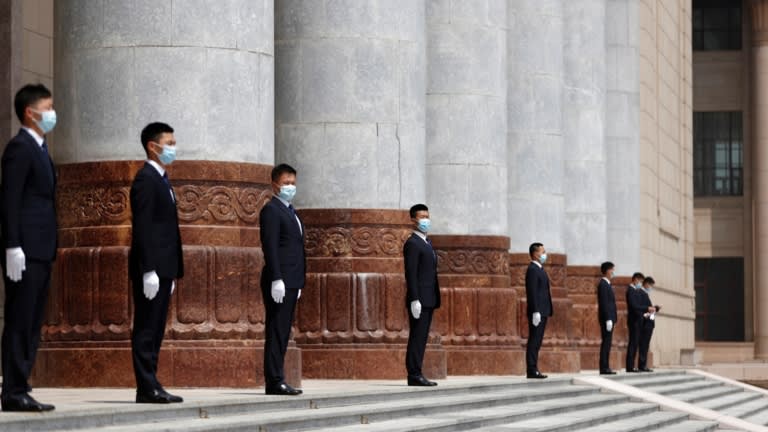 Security personnel wearing face masks following the coronavirus outbreak stand guard outside the Great Hall of the People after the opening session of the National People’s Congress in Beijing.

11:30 a.m. Yasutoshi Nishimura, the minister in charge of Japan’s coronavirus response, says an expert panel on COVID-19 has accepted a government proposal to lift the state of emergency in Japan’s five remaining prefectures, including Tokyo, Kanagawa and Hokkaido. A government task force will finalize the decision later in the day.

10:00 a.m. China reports 11 new confirmed cases as of the end of May 24, up from three a day earlier. All are imported cases involving travelers from overseas, including 10 detected in the Inner Mongolia region. The report also notes 40 new asymptomatic cases — patients who are infected but do not show symptoms — compared with 36 a day earlier.

9:35 a.m. Japan is set to lift the coronavirus state of emergency in Tokyo and four other prefectures still on alert, ending seven weeks of economic restrictions and ushering in an uncertain “new normal” on Monday.

7:00 a.m. The White House announces it is prohibiting foreigners from entering the U.S. if they have been in Brazil anytime during the two weeks before their intended arrival. Brazil on Friday surpassed Russia as the world’s No. 2 coronavirus hotspot, trailing only the U.S. It now has over 347,000 cases.

6:39 a.m.The Japanese capital may have suffered more than 200 excess fatalities from pneumonia and other causes early in the outbreak, possibly dwarfing the period’s official coronavirus death count of 16.

2:25 a.m. The Japanese government is preparing a coronavirus relief package of more than $900 billion, aiming to strengthen the corporate safety net in following up on last month’s $1 trillion stimulus. 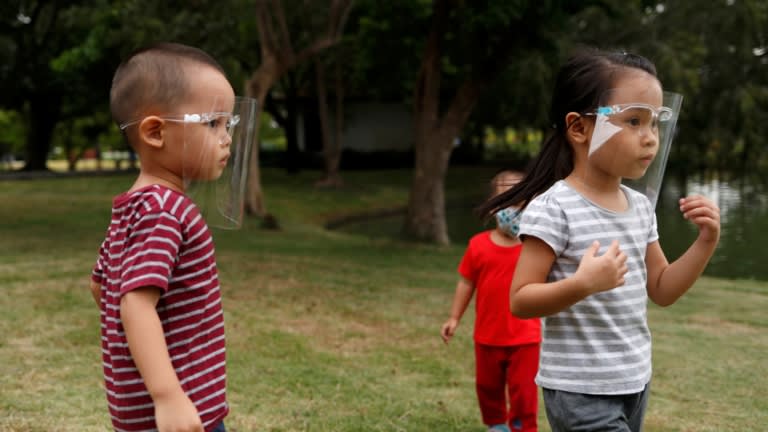 Children wear protective shields as they spend the afternoon at a park in Bangkok after the Thai government eased isolation measures.

1:57 p.m. Thailand on Sunday reports no new coronavirus cases and no new deaths, maintaining the total to 3,040 confirmed cases and 56 fatalities since the outbreak began in January. This is the fourth time in this month that there were no new daily cases.

1:00 p.m. The coronavirus outbreak has forced digital-savvy South Korean companies and citizens to rethink many aspects of their interaction with technology — finding new business models but also acknowledging some of the downsides.

9:04 a.m. Oil demand in China, the second-largest market in the world, is returning to pre-pandemic levels, with prices on the rise, even as the global outlook for the commodity remains bleak.

8:29 a.m. Brazil registers 965 new coronavirus deaths on Saturday, taking the total number of fatalities to 22,013. The country now has 347,398 confirmed cases, according to the ministry, up 16,508 from Friday, when it surpassed Russia to become the world’s virus hot spot behind the U.S.

1:21 a.m. Thailand on Saturday begins testing a vaccine against the coronavirus on monkeys after positive trials in mice, an official said. They hope to have a “clearer outcome” of its effectiveness by September.

5:40 p.m. Malaysia reports 48 new coronavirus cases, bringing the total number of infections in the country to 7,185. The health ministry also says no new deaths were recorded, with the number of fatalities remaining at 115.

4:35 p.m. Russia says that 9,434 new cases of the novel coronavirus had been reported in the last 24 hours, pushing its nationwide tally to 335,882. The country’s coronavirus crisis response center reports 139 new fatalities after a record of 150 deaths the day before, bringing the death toll to 3,388.

11:50 a.m. China’s National Health Commission says the country reported no new cases of the new coronavirus on Friday, marking the first day of zero confirmed cases since the outbreak started late last year. But the commission said that there were two new suspected cases in Shanghai and Jilin.

11:42 a.m. Car rental firm Hertz Global Holdings Inc. files for bankruptcy protection after its business all but vanished during the coronavirus pandemic and talks with creditors failed to result in needed relief, according to Reuters.