Global cases have reached 3,595,662, according to the World Health Organization.

7:06 a.m. The U.S.-China relationship is one of “disappointment and frustration,” says White House Press Secretary Kayleigh McEnany, accusing China of withholding information about the virus. “The president has said how frustrated he is at some of the decisions of China that put American lives at risk,” she added.

10:39 p.m. More than 60 workers at a factory run by the Indonesian unit of U.S. tobacco giant Philip Morris have tested positive for the coronavirus after operations were suspended when two staff died from infections. The factory implemented strict physical distancing protocols, temperature checks and other hygiene protocols since mid-March, after the virus was first reported in Indonesia

President Joko Widodo told cabinet ministers on Wednesday to use “all means necessary” to curb the virus spread. Meanwhile, the transport ministry said it will relax restrictions on rail, air and ferry services following complaints from people supposed to be exempted from movement restrictions such as healthcare and food workers.

The city-state on Wednesday confirmed 788 new cases, bringing the total to 20,198 — double the figure two weeks ago — with 18 deaths. Most of the recent cases are migrant workers residing in densely packed dormitories.

4:22 p.m. Thirty-eight new cases were confirmed in Tokyo on Wednesday, bringing the total in the Japanese capital to 4,750. While the daily figure is the lowest since late March, it comes at the end of Golden Week and the national holiday may have had an impact on testing and hospital hours.

12:11 p.m. Taiwanese Health Minister Chen Shih-Chung said Wednesday that audiences of up to 1,000 will be permitted to attend professional baseball games from Friday.

9:10 a.m. The Walt Disney Co. said it will start reopening Shanghai Disneyland on May 11, more than three months after closing the theme park. It will be the first Disney theme park to resume business, with others — including Hong Kong, Tokyo, Paris, California and Florida — remaining closed.

8:23 a.m. U.S. President Donald Trump announced the White House will wind down its coronavirus task force as the country moves into the next phase of containing the epidemic. He is considering discontinuing the task force by early June.

7:53 a.m. Brazil hits a record for daily coronavirus deaths, with 600 new fatalities on Tuesday. Meanwhile, Fitch Ratings lowered its outlook for Brazil’s credit rating to “negative” from “stable,” as the country suffers severe economic and financial damage from the pandemic.

3:41 a.m. Japanese shipbuilders have been maneuvering behind the scenes to win a contract to build the country’s first hospital ship as the coronavirus pandemic threatens to create a shortage of patient beds on land.

12:09 a.m. Japan will provide the potential coronavirus treatment Avigan free of charge to Iran as part of a distribution of the flu drug to more than 40 countries.

10:30 p.m. U.S. stocks open with gains of more than 1% on hopes for re-opening the American economy.

9:41 p.m. The Indian government says it will operate 64 flights from May 7 to May 13 to bring back 14,800 of its nationals stranded overseas, including in countries such as the United Arab Emirates, the U.K., the U.S., Singapore, Malaysia and the Philippines.

9:26 p.m. Despite the coronavirus outbreak largely being under control in China, the number of domestic tourists fell by 91 million people year-over-year during the first four days of the Golden Week national holiday which started on May 1, according to the country’s ministry of culture and tourism. Meanwhile, tourism-related revenue also plunged by roughly two-thirds to 43.2 billion yuan ($6 billion), versus nearly 117.7 billion yuan during the same period of last year.

3:15 p.m. Taiwan’s Foreign Ministry says the World Health Organization should “cast off” China’s control during the coronavirus pandemic. The spokesperson also said Taiwan’s exclusion from the WHO, due to China’s objections, has infuriated Taipei and created a dangerous gap in the global fight against the virus.

3:04 p.m. Tokyo Gov. Yuriko Koike is preparing a second round of support payments to stores that have closed to help contain the coronavirus, Nikkei has learned. As was the case with the initial subsidy, stores and restaurants are likely to receive 500,000 yen ($4,684) each. 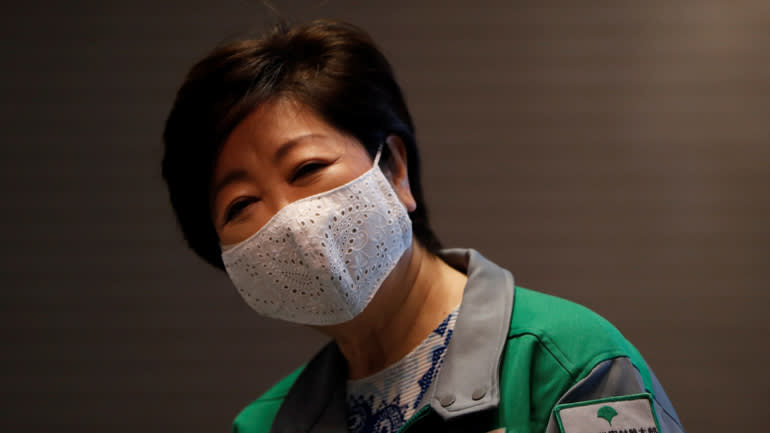 2:27 p.m. Indonesia’s economic growth slowed more than expected in the first quarter of 2020 as the impact of the coronavirus had a devastating effect on the archipelago. The country’s real gross domestic product rose 2.97% in the three months ended in March from the same period last year. That was down from growth of 4.97% in the final quarter of 2019, according to data published by Badan Pusat Statistik, Indonesia’s statistics agency.

1:39 p.m. India witnesses the largest increase in COVID-19 cases with 3,900 new infections, compared with the 2,553 reported on Monday morning, taking the country’s total to 46,433. The number of fatalities also saw the highest jump as 195 people died in the past 24 hours. With this, the death toll now stands at 1,568. 11:10 a.m. New Zealand reports no new cases for a second consecutive day. Prime Minister Jacinda Ardern urged people to double-down, saying, “Don’t do anything that snatches our potential victory at this point,” according to the New Zealand Herald.

9:50 a.m. Data from China’s National Health Commission says it confirmed one new case on Monday, down from three the previous day.

8:04 a.m. During a midnight speech, Philippine President Rodrigo Duterte apologizes to the owners of conglomerate Ayala Corp. and PLDT, and to Metro Pacific Investment Chairman Manuel Pangilinan for threatening to arrest them and rough up their faces in December over a water dispute. “Ayalas, Pangilinan, I apologize for the hurting words,” the president said. “Thank you from the bottom of [my] heart for helping us provide necessities [during the pandemic]. I can promise you that I’ll be nice.”

4:30 a.m. Some businesses in California may begin to reopen on a limited basis this week, Reuters quotes Gov. Gavin Newsom as saying.

3:41 a.m. Read more about how U.S. President Donald Trump has escalated his China blame game, pushing Wuhan lab theory of the original of the novel coronavirus.

2:25 a.m. As Asia focuses its resources on containing the coronavirus outbreak and its economic impact, large infrastructure projects funded by China have come to a standstill across Southeast Asia.

1:32 a.m. Malaysia disputes the World Health Organisation’s recommendation that adults avoid palm oil in their diet during the COVID-19 outbreak, with a government agency calling the advice “antiquated.” The Southeast Asian nation is the world’s second-biggest producer of palm oil. 12:01 a.m. Japan looks to approve flu drug Avigan as a coronavirus treatment within the month, speeding up the process by months.

9:07 p.m. The Philippines imposes a temporary additional 10% tax on imported crude oil and refined petroleum products to generate funds for efforts to fight the coronavirus pandemic.

5:53 p.m. Hong Kong’s first-quarter GDP falls 8.9% compared to a year earlier, a steeper decline than markets had expected and the worst contraction on record.

4:25 p.m. U.K. defense minister Ben Wallace says China has questions to answer over the information it shared about the novel coronavirus outbreak, though a post mortem over its role should come later. Asked by LBC radio if China had questions to answer over how quickly it made the world aware of the extent of the crisis, he said: “I think it does,” Reuters reported. Bali is among Indonesia’s tourist draws that have been left all but empty by the coronavirus outbreak.

2:44 p.m. The Vietnamese government has ordered companies to make ventilators in a move to bolster the country’s capacity to supply its hospitals, and conglomerate Vingroup is looking to secure outside partners to answer the call.

2:08 p.m. Toshiba in June will start four-day workweeks at its manufacturing sites in Japan, Nikkei reports. Employees will work more hours each workday but commute one fewer day each week.

12:35 p.m. Japan’s economic revitalization minister Yasutoshi Nishimura says a panel of coronavirus experts has approved a government plan to extend the state of emergency until the end of May. The government is set to make the extension official later in the day.

10:52 a.m. New Zealand reports zero new cases of COVID-19 for the first time in nearly six weeks. Director-General of Health Ashley Bloomfield says he wants to keep it that way, according to the New Zealand Herald.

8:10 a.m. Lynas Corp, the largest producer of rare earths outside China, says its processing plant in Malaysia will restart today at about a 70% production rate.

4:15 a.m. U.S. Secretary of State Mike Pompeo says there is “a significant amount of evidence” the new coronavirus emerged from a Chinese laboratory. 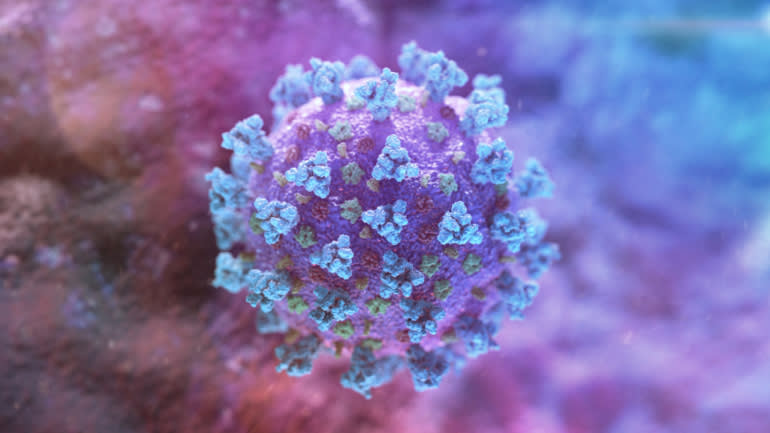 A computer image created by Nexu Science Communication together with Trinity College in Dublin, shows a model structurally representative of a betacoronavirus which is the type of virus linked to COVID-19.

6:47 p.m. Japanese Prime Minister Shinzo Abe is planning to extend Japan’s state of emergency by around a month through May 31 to fight the novel coronavirus, a government official says.

5:05 p.m. The number of coronavirus cases in the Philippines climbs to 9,223 after the Health Ministry reported 295 new infections. The ministry records four more deaths related to COVID-19, bringing the tally to 607.

4:14 p.m. Singapore’s health ministry confirms 657 new coronavirus infections, taking the city-state’s total to 18,205. Most of the new cases are among migrant workers living in dormitories.

3:33 a.m. Authorities in Singapore say they are preparing to ease up on the business restrictions over the next several weeks. Laundries and barbershops will be among operations allowed to reopen.

9:34 p.m. Japan’s health minister Katsunobu Kato says the approval process for promising coronavirus treatment remdesivir will be sped up to around a week. Tokyo, meanwhile, is urging the U.S. to secure it supplies of the drug.

5:10 p.m. The Philippines records 156 new cases of the coronavirus and 24 more deaths, bringing the total number of infections in the country to 8,928 and fatalities to 603.

4:21 p.m. Singapore confirms 447 new coronavirus infections, the smallest daily rise in two weeks, taking the city-state’s tally of cases to 17,548 with 16 virus-related deaths. Most of the new cases are among migrant workers living in dormitories, the health ministry says.

3:05 p.m. Thailand reported six new cases of the new coronavirus and no new deaths. Thirteen additional patients have recovered and were discharged, according to the Bangkok Post.