NEW DELHI/KATHMANDU/DHAKA — “We might soon be homeless, because I cannot pay the 90 Kuwaiti dinars ($290) rent,” said Lok Bahadur Rai, 36, a Nepalese chef who lives in Kuwait with his wife.

Rai’s ordeal began when he returned to Kuwait a month and half ago following a trip home. The hospitality company he worked for laid him off after it ran into financial trouble due to the COVID-19 pandemic.

“My visa is expiring on May 20… I want to go back to my village in Sankhuwasabha district [in eastern Nepal],” he said, adding that he wants to set up a poultry farm. But he and his wife are waiting to be repatriated by their government. All international commercial flights to Nepal have been suspended until May 30.

Rai is not alone. Dinabandhu Samal, an Indian executive who worked for an information technology company in Oman, is coordinating with the Indian government to bring home at least 120 migrant workers who, like him, hail from the eastern state of Odisha. “Many have lost jobs and [are] running out of money,” said Samal, whose own employment ended in mid-April.

There are at least 900,000 South Asians who are stranded overseas awaiting repatriation, mostly migrants workers in the Middle East. Migrants have long sought work in the energy-rich region, drawn by the prospect of better pay and a lack of opportunity at home. Offering their services as construction workers, domestic helpers, cooks, nurses, doctors — their remittances help their families fend off poverty and keep their home countries’ public finances afloat.

Migrant workers in Ahmedabad, India, wait for trains take them to their homes in the northern state of Uttar Pradesh on May 14: Oveseas migrants, too, face an uncertain future.

But the novel coronavirus outbreak and subsequent lockdowns have pushed tens of thousands of migrants out of work. Many hope to be repatriated, including through government evacuation missions. As a practical matter, they have little choice. But bringing migrant workers home is a heavy burden to the countries that sent them.

Anita, a homemaker who lives near New Delhi, has a daughter working as a teacher in the United Arab Emirates. She says she wants her daughter to come home and look for a job in India. “Many people overseas have already lost employment,” she said. Still, she worries her daughter might have trouble finding employment when she arrives.

India’s unemployment rate in April nearly tripled from the previous month to 23.5%, according to the Centre for Monitoring Indian Economy. In all, more than 120 million people were out of work.

Like their Indian counterparts, migrant workers from Bangladesh, Pakistan, Nepal, Sri Lanka and Bhutan are waiting to return home, worried their jobs may disappear and their savings evaporate. But their arrival is likely to fuel joblessness and other problems in their countries of origin. According to a World Bank report published in late April, India was the top recipient of worker remittances in South Asia last year, at $83.1 billion, followed by Pakistan ($22.5 billion), Bangladesh ($18.3 billion), Nepal ($8.1 billion), and Sri Lanka ($6.7 billion). But the report forecasts total remittances to South Asia will decline 22% to $109 billion this year, compared with growth of 6.1% in 2019, owing to the global economic slowdown brought on by the coronavirus outbreak and a drop in oil prices.

“The impact on the economy will be huge,” too, Muhammad Faruk Khan, chairman of the parliamentary standing committee on Bangladesh’s Ministry of Foreign Affairs, told the Nikkei Asian Review, warning that migrants’ families will fall back into poverty. Official statistics show 200,000 Bangladeshis were unable to go abroad to take up new jobs between March and April.

One of those was Arman Hossain. Hossain was supposed to fly to Saudi Arabia last month to begin working in construction, but the virus dashed his hopes. “Now I can’t go,” he said, voicing concern over unconfirmed news reports that the kingdom has scrapped all new visas.

The drying up of overseas remittances is expected to dent private consumption in migrants’ home countries, as well as worsening their balance of payments.

Among South Asian countries, Nepal may suffer the most. Remittances from its 1.5 million overseas workers are the country’s biggest source of foreign exchange and worth a quarter of its gross domestic product. Nepalese are employed in Malaysia, the Persian Gulf and elsewhere, in industries ranging from oil production to hospitality. “We have estimated that 15% to 33% of Nepalese migrant workers will lose their jobs due to the pandemic,” Foreign Minister Pradeep Kumar Gyawali said at a recent parliamentary committee meeting, adding that a total of 325,000 workers require repatriation. “If we can’t integrate them into our job market, the implications will be huge.”

Sri Lanka’s Foreign Ministry also announced on May 17 that nearly 40,000 of its citizens in 143 countries are seeking to return home, of which more than 27,800 are migrant workers.

The return of hundreds of thousands of migrant workers casts another shadow: the likelihood that their home countries’ health care systems will be overwhelmed by people sick with COVID-19.

“Bangladesh didn’t have [the virus],” A.S.M. Alamgir, principal scientific officer with the government’s Institute of Epidemiology, Disease Control and Research, told Nikkei, adding bluntly that returnees brought it into the country.

Another nearly 29,000 stranded Bangladeshi migrants — mostly prisoners, jobless and undocumented workers — are likely to be sent back from the Middle East over the next few weeks, raising concerns over further transmission of COVID-19 in a country whose health care system is woefully unprepared to handle the pandemic. India, meanwhile, has launched a huge evacuation effort for citizens stranded abroad. In the United Arab Emirates alone, close to 200,000 Indians have asked for help to return home, amid reports that more than 400,000 Indians around the world are looking to return.

Some countries will have trouble dealing with a sudden influx of returning migrant workers.

The tiny Himalayan kingdom of Bhutan has more than 5,000 nationals looking to return home from the Middle East. It is working out plans to fly them back, but the returnees will have to pay their own way, as will migrants being repatriated by India.

Bhutanese Prime Minister Lotay Tshering said there are around 15,000 to 16,000 Bhutanese living abroad and that the kingdom remains concerned about their welfare. He also said the quarantine period in Bhutan would be extended from 14 to 21 days, as there is a risk that people may test positive for the virus even after two weeks in isolation.

As of May 18, Bhutan had 1,101 people in quarantine facilities. However, with more Bhutanese wanting to return home, the challenge, apart from arranging their transport, is setting up more isolation facilities. 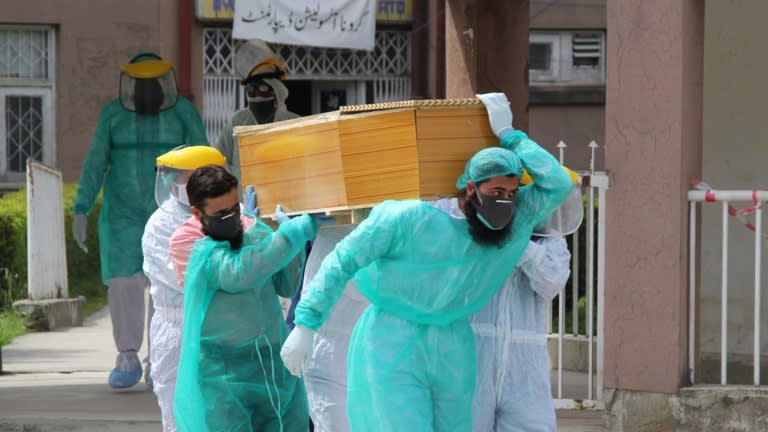 Health workers in protective clothing carry the body of a man who died from the novel coronavirus outside an isolation ward at the Ayub Teaching Hospital in Abbottabad, Pakistan, on April 16.

“Those who test negative will be allowed to go home, while people with positive tests will be quarantined,” Yusuf said, amid reports that 12% of returnees, on average, have tested positive — a problem other South Asian nations are also grappling with.

The wave of returning migrants is becoming a major factor in the surge of coronavirus infections across South Asia, while new cases are leveling off or declining in recent weeks in many countries in Europe and the U.S.

This gives authorities in South Asia good cause for concern. “The government should evacuate migrants in stages, because it cannot bring all of them at once,” said Ganesh Gurung, a labor expert in Nepal.

The obstacles migrant workers face getting back home thus look set to remain.

Narayan Bahadur Kunwar, who works in Kuwait at a local restaurant chain, said that his restaurant shut down in March and gave him and his six colleagues some food and a place to stay. But “the company said they won’t admit us to hospital [in Kuwait] if we contract COVID-19,” he said.

“Even if we have to die, we want to die in our own country.”