TOKYO — The Philippines and India have imposed some of the strictest coronavirus containment measures in Asia. Japan has taken a far less draconian approach, under a loose state of emergency now entering a second month. But in a way, these very different countries stand at a similar point in the fight against this devastating pandemic.

At least according to the official figures, their infections and deaths are well below those in the U.S. and hardest-hit European countries. Yet, short of a clear victory, they need more sustainable long-term battle plans.

This is one of the takeaways from the Nikkei Asian Review’s dive into the deep pool of data generated in a crisis that has touched virtually every corner of the world. From Google mobility tracking to simple trends in tests, cases and deaths, we compiled the numbers to gain a firmer grasp of the situation.

Some countries — New Zealand, Vietnam, Thailand and Malaysia — have gambled on gingerly restarting their economies in recent days, despite the risk of a new wave of infections. Japan’s Prime Minister Shinzo Abe made a different bet on Monday, extending the emergency until the end of May to try to stamp out the virus.

Abe did say he would cut the emergency short if conditions improve enough, but the extension is still another blow to an economy the International Monetary Fund already expects will contract 5.2% in 2020.

The data tells the story of why he made the call: While daily new cases dropped to about 200 at the end of April, less than a third of the peak of 743 on April 12, that is not enough.

Malaysia, before it reopened much of the economy on Monday, had not seen a triple-digit increase since April 17. Thailand, which eased its lockdown on Sunday, had gone days with fewer than 10. Vietnam put up a two-week streak of zeros, with a couple of exceptions.

Now Abe is counting on Japan’s 127 million people to help “flatten the curve” further. For although the country has avoided the grimmest scenarios, limiting the health ministry’s death total to 510 as of Monday noon, it has the region’s highest median age — 48.6 — in a pandemic that threatens the elderly and infirm the most. The nation logged double-digit deaths on all but a handful of days in the second half of April.

“Having successfully bent the curve, the challenge for the Abe administration may now be reducing the number of new infections to a sustainable level, ensuring that the medical system has the resources to manage the outbreak until therapeutics or a vaccine are developed,” Tobias Harris, Japan analyst at Teneo Intelligence, wrote in a note on Friday. “The government needs more time to implement a system that will enable it to detect and contain new case clusters, essential for resuming normal social and economic activities.” 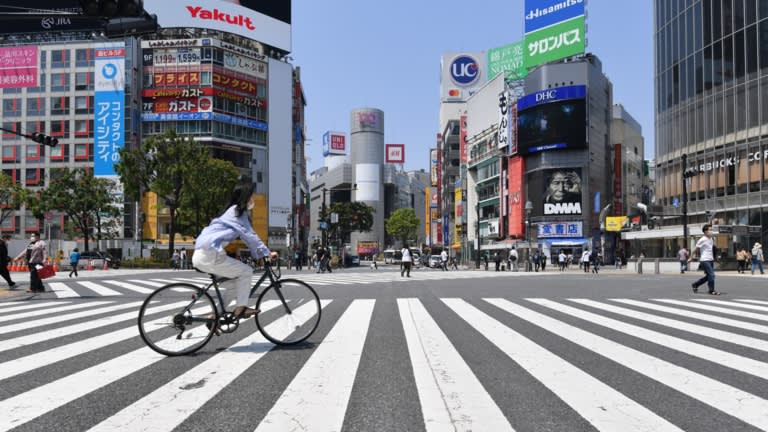 Google’s data shows the Japanese public has been fairly cooperative so far, though not to the point of reducing contact by 80% as the government originally hoped.

The U.S. tech company has released movement data from scores of countries, covering six categories: retail and recreation, grocery stores and pharmacies, parks, transit stations, workplaces and residential areas. Activity on April 17, a Friday, was compared to median Friday traffic between Jan. 3 and Feb. 6, before the crisis fully exploded out of China.

The Nikkei Asian Review averaged the figures for the six categories to gauge social distancing efforts in key economies. In Japan’s case, the average was down by 13.83%, largely thanks to a 46% decrease in traffic through transit stations and 31% drop in retail and recreation activity. But Japan’s social distancing pales in comparison to the Philippines and India, which saw average declines of 50.83% and 47.83% respectively. Malaysia was just behind at 47.50%, followed by Singapore at 36.16%, amid the city-state’s struggle to control big clusters in migrant worker dormitories.

The Philippines, land of President Rodrigo Duterte’s war on drugs, has taken a decidedly less deadly but similarly enthusiastic approach to enforcing its lockdown. More than 30,000 people have been arrested for violating the orders, according to reports.

Since mid-March, residents on the main island of Luzon have been barred from leaving home except for essential outings for food or medicine. Only one household member is allowed out at a time and they must carry a permit to pass street-corner checkpoints manned by the police and the military. The restrictions are expected to last at least until May 15. The Philippines has enforced a strict lockdown to halt the coronavirus, arresting over 30,000 in the process, according to reports.

India, meanwhile, extended the “world’s largest lockdown” last Friday to May 17. Large segments of the economy remain shut down and anyone caught flouting the regulations can face imprisonment.

“India didn’t wait for the problem to [escalate],” Prime Minister Narendra Modi said on April 14, about three weeks into the lockdown. “Rather, we attempted to nip the problem in the bud itself, by taking quick decisions as soon as it arose. … Had India not adopted a holistic and integrated approach, taking quick and decisive action, the situation in India today would have been completely different.” Indeed, India has logged 40,000-plus total cases and over 1,300 deaths — serious but not staggering numbers in a country of 1.3 billion. The Philippines has detected around 9,000 infections, with about 600 deaths.

Both nations may be helped by their youth, with a median age of 24 in the Philippines and 28 in India. On the other hand, the Philippines’ relatively high mortality rate among confirmed coronavirus patients suggests its medical services are severely strained: 6.7% as of April 29, versus 3.2% in India and 2.9% in Japan.

The fact that daily cases are still rising in India and just plateauing in the Philippines also raises the question of how much even the tightest lockdowns can achieve in densely populated countries.

With so many variables — population, economic development, medical resources — one containment approach will never fit all. Still, as governments scramble to leave this crisis behind, success stories could light the way. 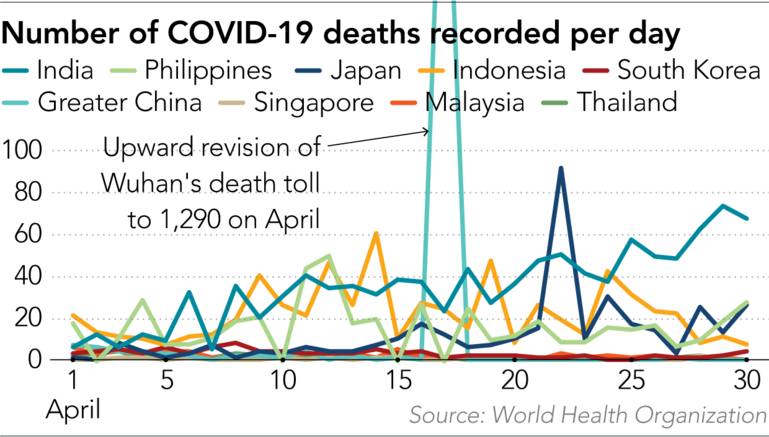 South Korea has limited daily cases to low double or single digits for weeks. Taiwan has also fared well: Its highest single-day count in April was 22, and it has gone days with zero or only imported infections. Both have seen their outbreaks peter out even though the Google data shows only an 11% decline in activity for South Korea and 2% for Taiwan.

South Korea’s testing campaign has been one of the more aggressive, checking 12 people per 1,000 residents, versus just 1 in Japan. Taiwan has not tested nearly as much. Its ratio is closer to Japan’s — 2.6 per 1,000 people. But two things South Korea and Taiwan have in common are effective use of technology and a widespread willingness to sacrifice privacy.

Taiwan’s government worked with messaging app provider Line and smartphone maker HTC to develop an app that checks on people in quarantine and allows them to alert authorities of symptoms. Digital Minister Audrey Tang also spearheaded the use of big data and health IDs to ensure fair distribution of surgical masks. South Korea has been using data from cellphones, credit card transactions and even security camera footage to track the movements of people found to be infected. This information is shared with the public so that others can avoid at-risk locations.

Seoul seems to have learned from the Middle East Respiratory Syndrome crisis in 2015. Back then, the authorities initially refused to reveal the hospitals where MERS patients were treated, in the name of avoiding panic. Throughout the outbreak, which killed 35, the government was criticized for a lack of transparency.

After MERS, the government revised a law to allow testing by private entities, which “enabled a fast response” to the new coronavirus, according to Kim Myoung-jun, associate fellow at the NLI Research Institute.

And this time, a virtuous circle of trust appears to have developed between President Moon Jae-in’s government and the public, as illustrated by the landslide win by Moon’s Democrats in the recent parliamentary election. Kim noted that decades of tensions with North Korea have also made citizens more “willing to compromise their information to protect the country.” Other explanations of Koreans’ behavior during this crisis highlight a cultural aversion to inconveniencing others through selfish behavior. Sixty-two percent of respondents to a Seoul National University survey said they feared social stigmatization and harm if they were found to be infected.

Nevertheless, epidemiologists warn that no place is immune to a COVID-19 comeback. By some estimates, up to half of all infected individuals are asymptomatic. They can spread the virus without knowing they have it.

So as countries look to get back to business, experts stress that a new set of long-haul measures will be needed.

Kenji Shibuya, director of the Institute of Population Health at King’s College London, advises maintaining three types of defenses after relaxing restrictions: border controls, PCR testing and isolation of positive cases, and some degree of social distancing. He stressed that border restrictions alone are “not effective in the long term.” The key is to “test and isolate.”

Hiroshi Nishiura, an expert advising Japan’s government, agrees that “lives are not going to be the same right away” once the state of emergency eventually ends, perhaps not for a year. 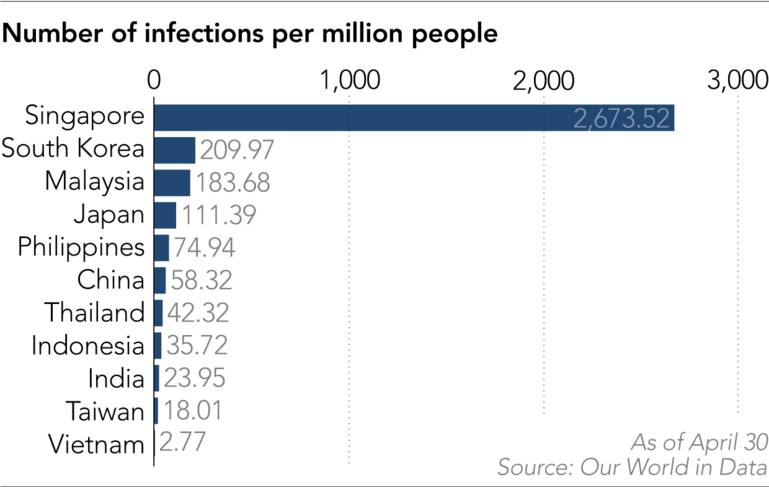 Taiwan, for its part, still requires face masks on public transportation and bans eating and drinking on high-speed railways. Temperature checks and hand sanitizing have become part of the standard restaurant experience. Some establishments ask customers to leave contact information.

South Korea will relax its social distancing guidelines on Wednesday, but the government is implementing what it calls “everyday quarantine” — a set of safeguards that will remain in place indefinitely. People will be advised to wear masks at indoor gatherings and try to stay 2 meters apart, among other advice.

On Monday, the prime minister said at a meeting that South Koreans must learn to live with the virus as part of public life.

But as cases decline and people yearn for normalcy, experts see a danger of complacency. Kim said “it remains to be seen how much the citizens comply.”