TOKYO — Japan, its Asian neighbors, European countries and the U.S. are all looking to carve their own unique paths toward the same destination — an exit from the coronavirus crisis that has hammered their economies.

Japanese Prime Minister Shinzo Abe on Thursday evening announced he would lift the state of emergency in 39 of the country’s 47 prefectures. Tokyo, one of the world’s most populous metropolitan areas, and other big cities remain on alert, but their status will be reassessed in a week.

Unlike the strict lockdowns seen in countries like India and France, the precautions Japan introduced back on April 7 still allowed residents to use public transportation and eat in restaurants. But even the loose “stay home” request prompted an outcry from businesses and stressed-out residents, pushing Abe to relax the safeguards and explain the government’s rationale for further easing.

“With the state of emergency lifted in many locations, today is the start of a new everyday life in the coronavirus era,” Abe said. Still, he cautioned, “the virus will certainly be present around us.”

Much of the world is now attempting this high-stakes balancing act — avoiding a full-on economic collapse while also preventing a new rush of infections that could overwhelm medical services. Like Abe’s, many governments have begun to lay out specific criteria for reopening their economies. Some are also setting conditions for restoring restrictions, in case the deadly virus appears to be making a comeback.

A number of Southeast Asian economies are rumbling back to life, now that their outbreaks appear to be more or less stamped out. Vietnam all but declared victory over the virus in late April, and has gone weeks without finding a local infection. Thailand joined the zero club on Wednesday, reporting no new COVID-19 infections for the first time in over two months.

Malaysia’s movement control order remains in effect until June 9, but the government has made major concessions, allowing most business sectors to reopen on May 4.

Singapore’s “circuit breaker” shutdown, too, is scheduled to run until June 1, but the city-state this week allowed barbershops, laundry services and other businesses to unlock their doors. For many enterprises, reopening comes with a requirement to adopt a new online check-in system for customers and employees — allowing the authorities to quickly trace any cases that crop up. 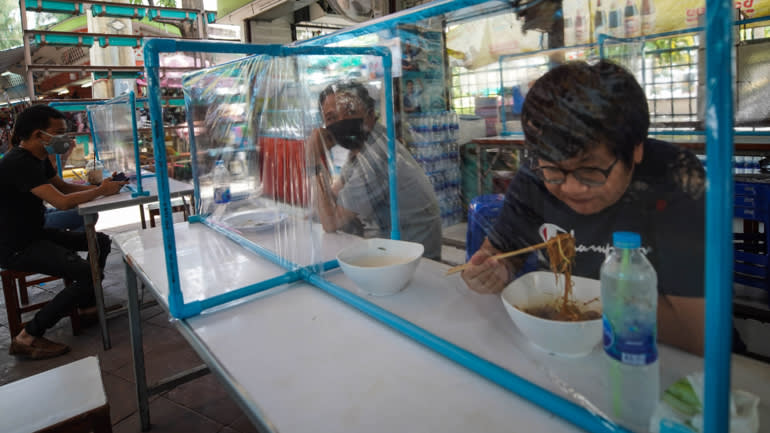 Diners eat noodles at a Bangkok restaurant on May 3, shielded by plastic. (Photo by Akira Kodaka)

In the U.S., local authorities are the decision-makers, though the White House has offered some guidelines — such as keeping cases on a downward trajectory for two weeks and ensuring there are plenty of tests available for health care workers.

In the state of New York, which has the highest number of confirmed cases in the country, the stay-at-home order is due to expire on Friday. The plan is for a phased, region-by-region reopening, based on prerequisites like a 14-day decline in hospitalizations. Industries will restart step by step, and companies are required to make plans to keep their workers safe.

“This is not a sustainable situation,” Gov. Andrew Cuomo said of the lockdown on May 8. “Close down everything, close down the economy, lock yourself in the home. You can do it for a short period of time but you can’t do it forever.”

Construction and manufacturing companies are to return to work first, with certain retailers allowed to offer only curbside pickup, similar to California. If phase one goes smoothly, professional services, real estate companies and some others will open next. They would be followed by restaurants, bars and hotels, and then theaters and other entertainment venues. Schools would be the last to reopen. A pedestrian rides a bicycle past a shuttered Radio City Music Hall in New York.

In the U.K., the worst-hit country in Europe, the government published a road map for phasing out the lockdown on Monday, and eased restrictions for the first time since March 23.

Workers who cannot do their jobs from home, such as those employed in manufacturing, are encouraged to return starting this week. The public will also be allowed more than one exercise or leisure outing per day, but people will still be required to keep 2 meters of distance between themselves and anyone outside their households.

Fearing another surge in cases — like the outbreak in a South Korean night club district after restrictions were eased last week — the U.K. and other countries are poised to snap back into crisis mode if necessary.

The U.K. will establish a Joint Biosecurity Center and use a five-level Covid Alert System to determine the coronavirus threat and the appropriate social distancing. The level will be based on case tallies and the virus reproduction number — how many people the average carrier infects.

Germany, which restarted much of its economy last week, is also keeping its guard up. Chancellor Angela Merkel has stressed the need to keep the reproduction number under 1. Considerable powers and responsibilities have also been shifted from the central government to federal states, with a stipulation that counties and cities are obliged to retighten restrictions if they book more than 50 new infections per 100,000 people in a seven-day period.

In Japan’s case, the government’s expert panel on Thursday approved guidelines for lifting emergency status that say new cases must remain under 0.5 per 100,000 people in a week. While the nationwide figure stood at 0.4 as of Wednesday, clearing the threshold, Tokyo’s number was still 1.3.

Meanwhile, the path to undoing the damage of shutdowns and lockdowns will be steeper for some. 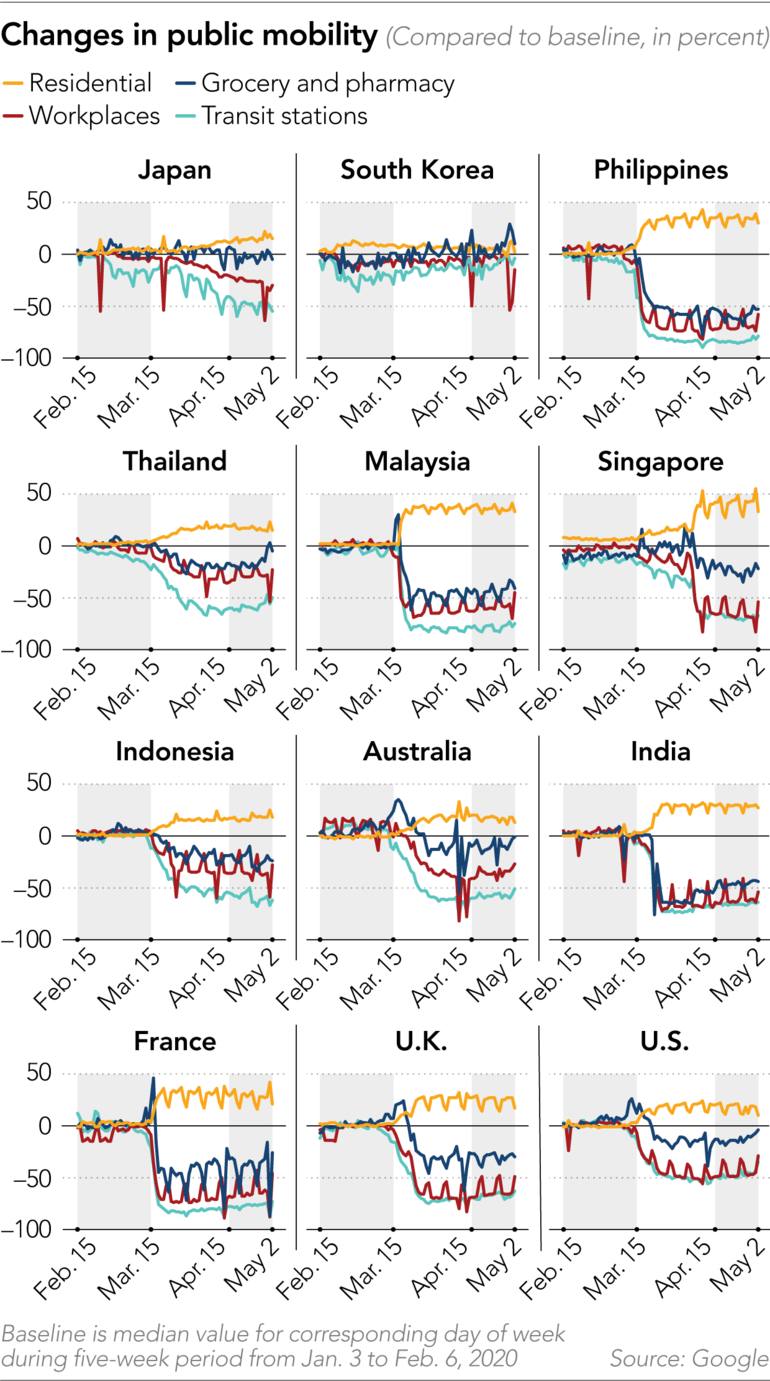 Goldman Sachs calculated a lockdown index gauging the extent of social distancing and policy efforts, using Google mobility data and other sources. The financial services company’s findings suggest India and Italy have faced the heaviest burdens. Singapore, the U.K., Germany and the U.S. fall in the middle, while Japan’s experience has been relatively light.

India’s situation is indeed stark: Roughly 120 million jobs have been lost so far as a direct consequence of the “world’s largest lockdown,” according to the Centre for Monitoring Indian Economy, a Mumbai-based independent think tank.

When Prime Minister Narendra Modi announced nationwide restrictions in the evening of March 24, he gave only four hours of notice. Millions of migrant workers, who were living hand to mouth on daily wages in cities, quickly lost their jobs and were kicked out of their dwellings. 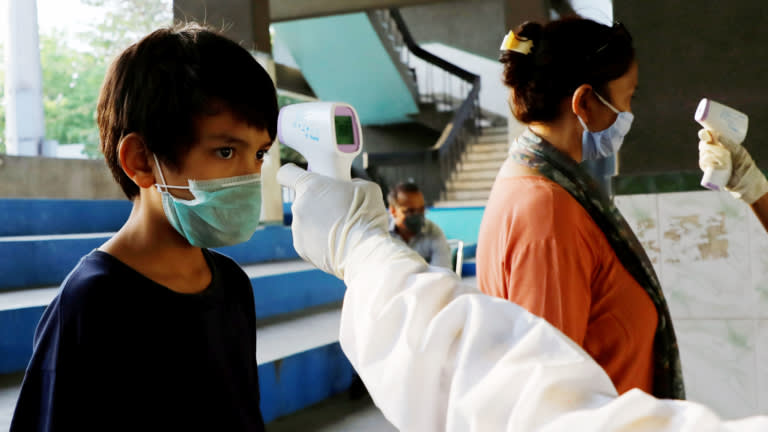 Temperature screening in India: The country’s massive lockdown has taken a severe toll on employment.

Modi’s government has since eased restrictions in certain safe “zones.” In a televised speech on Tuesday night, he announced another extension beyond the lockdown’s expiry date this Sunday, but said “the fourth phase of the lockdown will be completely redesigned, with new rules.” The details have yet to emerge.

Japan’s position, though far from the worst, is by no means simple.

So far, despite its looser state of emergency and oft-scrutinized approach to containment, the country has avoided the staggering death tolls seen in Italy, the U.S. and elsewhere. Abe and his advisers want to keep it that way, even after they remove the minimal restrictions.

Experts are advocating “new ways of life,” including a degree of social distancing, at least until a cure or vaccine is found. After the emergency is lifted, businesses will be expected to follow preventive measures. But Japan has yet to match the contact tracing capabilities of, say, Singapore; its own virus tracking app remains in development.

Abe’s government is also under pressure to offer additional economic assistance. Bankruptcies are gradually rising, with a 15% increase in April over the previous year, according to Tokyo Shoko Research. A recent survey by public relations company Kekst CNC showed that 58% thought the government was not doing enough to help businesses weather the crisis.

At his news conference on Thursday, Abe said his government would work on a second supplementary budget to help resuscitate the economy. This would be on top of the 108 trillion yen ($1 trillion) stimulus package his cabinet already approved last month.

Abe vowed to “protect the lives and health of citizens, and to secure livelihoods and employment.”

“I want to create a new everyday life, step by step, with the people,” he stressed, apparently digging in for a long fight. “That is my responsibility.”