NEW DELHI/BEIJING — A tense military standoff between India and China over a disputed border in the western Himalayas took a dangerous turn this week when 20 Indian soldiers were killed in violent clashes.

On Wednesday, Prime Minister Narendra Modi said India would defend every inch of its territory. “I would like to assure the nation that the sacrifice of our soldiers will not go in vain,” Modi said. “India wants peace, but is capable of giving a befitting reply if instigated.”

In a phone call Wednesday with his Chinese counterpart, Indian External Affairs Minister S. Jaishankar blamed China for triggering the conflict, saying “the Chinese side sought to erect a structure” in an area in the Galwan valley that India considers “our side.”

When this became a dispute, “the Chinese side took premeditated and planned action that was directly responsible for the resulting violence and casualties,” the Indian diplomat told Chinese Foreign Minister Wang Yi.

The Chinese side issued a starkly different take on the phone call.

Wang demanded that India carry out a thorough investigation into the border incident, XInhua News Agency reported. He pressed Jaishankar to “severely punish those who should be held accountable, strictly discipline Indian frontline troops, and immediate stop all provocative actions so as to ensure that such incidents do not happen again,” the report said.

Separately, the Chinese side called for dialogue to defuse the situation. Chinese Foreign Ministry spokesperson Zhao Lijian told media: “Both sides agree to resolve this matter through dialogue and consultation and make efforts to ease the situation and safeguard peace and tranquillity in the border area.”

New Delhi said China also suffered casualties in the incident late Monday at the Galwan Valley in eastern Ladakh, but Beijing has not revealed any figures. Local ANI news agency reported the Chinese side suffered 43 casualties, including the dead and seriously injured.

Both sides accused each other of unilateral action. No shots were fired during the deadly clashes, although stones and clubs were used in the fighting.

A Reuters report, citing Russian media, said that a June 23 video conference between the foreign ministers of Russia, China and India had now been postponed. The ministers were meant to discuss a response to the coronavirus pandemic. 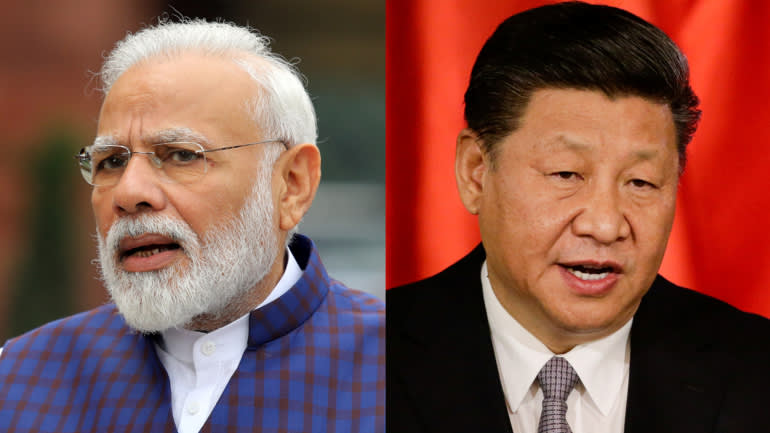 Indian Prime Minister Narendra Modi has warned of a “befitting” response to the clashes at the LAC while the Chinese side, led by President Xi Jinping, has called for dialogue to resolve the conflict. (Source photo by Reuters)

What is the India-China border dispute about?

The two nuclear-armed countries, also the world’s most populous, have long been fractious neighbors and share a 500 km Line of Actual Control or LAC, a border over which they also fought a war in 1962.

There is no commonly agreed LAC between India and China. The countries have held 22 rounds of negotiations to resolve the boundary issue since 2003 but no major progress has been made.

Monday’s violent clashes were the first fatal ones in over four decades. Experts said no bullets have been fired along the disputed border since 1975. This is in part due to several signed agreements between the two since 1993 to refrain from the use of force to maintain peace along the border.

“They have something called a banner drill,” said N.C. Bipindra, founder and editor of defense and strategic news portal Defence.Capital. According to him, both sides will hold up banners to warn off the other if they feel an infringement had been made.

“Sometimes, they push and shove and fisticuffs happen but guns are always pointed to the ground if they carry them, usually [the guns are] behind their back with barrels facing the ground,” Bipindra said. What triggered the latest hostility?

The standoff began on May 5 when Indian and Chinese soldiers clashed at Pangong Tso, a lake 14,000 feet above sea level in Ladakh along the LAC. Troops engaged in fist fights and attacked each other with sticks and stones, leaving scores on both sides injured, India media reported. Over 1,000 Chinese soldiers were said to have transgressed onto Indian territory.

The hostility is believed to have been triggered by India laying a road in the region as part of efforts to improve infrastructure along the border, drawing objection from China. A few days after the May 5 clashes, similar outbreaks of violence occurred more than 1,000 km away in North Sikkim between troops.

“This is infrastructure game as far as border areas are concerned,” said Bipindra. “The Chinese have been at this game for a very long time but India sped up its infrastructure construction in the past few years.”

“Since the [Modi] government took over they have been aggressively pushing infrastructure projects [and] that is certainly a cause conflict as the Chinese didn’t like it,” he added.

How has the international community reacted?

Eri Kaneko, associate spokesperson for the U.N. Secretary General, expressed concerns about the violence and deaths at the LAC and urged both sides to exercise maximum restraint.

The U.S. State Department, meanwhile, pointed out in a statement that India and China had expressed their desire to de-escalate, and that Washington supported a peaceful resolution.

How serious is the situation?

Both sides have said they are engaged in talks to de-escalate the situation. However, experts remain concerned.

“It is a highly volatile and dangerous situation between two nationalistic, nuclear powers at a time when American influence has badly diminished,” said Abraham Denmark, Asia program director at The Wilson Center.

Eurasia Group, a political risk consultancy said fatalities at the LAC increased the chances of the standoff dragging into a “prolonged and unresolved situation.”

Analysts pointed out that the two countries needed to quickly complete the de-escalation process they started on June 6 between senior military staff.

“They should go back to their pre-May 1 positions and shouldn’t interfere unnecessary in each other’s infrastructure work,” Bipindra said. He added that it was not in China’s interest to open a new front against another Asian giant, at a time when the whole world was viewing it as “a villain” due to the coronavirus pandemic which originated in Wuhan.