NEW DELHI — Indian and Chinese troops are engaged in a tense standoff along the Himalayan border amid fears that the latest military confrontation could turn far more serious than the Doklam conflict that lasted 73 days in 2017.

U.S. President Donald Trump offered to mediate on Wednesday after Chinese troops were alleged to have encroached on to Indian territory. “We have informed both India and China that the United States is ready, willing and able to mediate or arbitrate their now raging border dispute,” he tweeted, although neither side had responded to his offer.

The standoff began on May 5 when Indian and Chinese soldiers clashed at Pangong Tso lake, which is 14,000 feet above sea level in the Himalayan region of Ladakh along their common border known as the Line of Actual Control, or LAC. Troops engaged in fistfights and attacked each other with sticks and stones, leaving scores on both sides injured, local media reported. Over 1,000 Chinese soldiers had transgressed onto Indian territory, those media said.

The hostility is believed to have been triggered by India laying a road in the region as part of efforts to improve infrastructure along the border, drawing objection from China. The two countries have long been fractious neighbors and share a 3,500 km border over which they fought a war in 1962.

A few days after the May 5 clashes, similar outbreaks of violence occurred more than a 1,000 kilometers away in North Sikkim between troops of the two nuclear-armed countries. The administration of Chinese President Xi Jinping has made conciliatory noises about the border confrontation while the government of Prime Minister Narendra Modi has been more subdued in their response.

In response to a question about China moving an additional 5,000 troops to its frontier with India, a foreign ministry spokesperson Zhao Lijian told media in Beijing on Wednesday that the overall situation along the border areas “is stable and controllable.”

“There are sound mechanisms and channels of communication between China and India, and the two sides are capable of properly resolving relevant issues through dialogue and consultation,” Zhao said. He explained that those mechanisms and channels extend beyond the border to the diplomatic departments and embassies of the two countries.

Chinese ambassador in New Delhi, Sun Weidong, too, struck a conciliatory tone during a webinar on the coronavirus pandemic and China-India cooperation.

“We should adhere to the basic judgment that China and India are each other’s opportunities and pose no threat to each other. We need to see each other’s development in a correct way and enhance strategic mutual trust,” he said. “We should correctly view our differences and never let the differences shadow the overall situation of bilateral cooperation.”

India, however, has been more reticent. A statement issued by Anurag Srivastava, its external affairs ministry spokesperson, on May 21 said, “Any suggestion that Indian troops had undertaken activity across the LAC in the Western sector or the Sikkim sector is not accurate.”

The statement said that all Indian activity was on its side of the LAC. “It is Chinese side that has recently undertaken activity hindering India’s normal patrolling patterns,” he was quoted as saying in the statement, adding India is deeply committed to ensuring its sovereignty and security.

The latest standoff appears to be the worst since the 2017 confrontation at a strategic junction of the Doklam plateau where the boundaries of India, China and Bhutan meet. The Doklam tensions lasted over two months, the longest such confrontation between India and China in decades.

To ease those tensions, Prime Minister Narendra Modi and Chinese President Xi Jinping held informal summits over the last two years, pledging to continue efforts to ensure peace and tranquillity along the boundary. But all that seem to have been undone by the latest confrontation.

On Tuesday, Xi — without naming any country — ordered the Chinese military to think about worst-case scenarios, and scale up training and battle preparedness, state-run Xinhua News Agency reported. 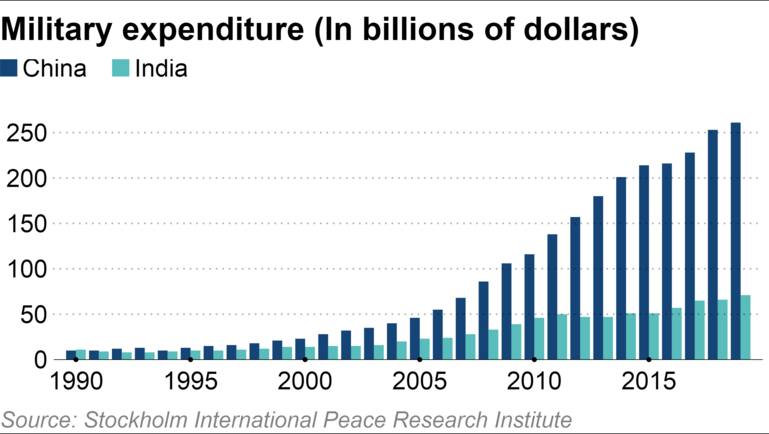 “The situation right now is pretty serious,” said N.C. Bipindra, founder and editor of Defence.Capital, a defense and strategic affairs news portal. “There are diplomatic efforts and military talks that are being attempted to defuse the situation but if this doesn’t fructify then the issue is going to flare up on the face of both the Indian and Chinese political leadership.”

Conciliatory noises made by the Chinese side are a positive development but Chinese troops must move back to their pre-confrontation position which is about 5 to 6 kilometers away from where they are now, he said.

“If that doesn’t happen then the Indian military is also making noises that they are firming up their ground positions [and] that isn’t good for the peace that has existed along the LAC,” Bipindra said.

There are about 1,000-1,500 troops from both sides facing each other, and there are no signs of de-escalation, he said.

Brahma Chellaney, a professor of strategic studies at New Delhi’s Centre for Policy Research, responded to the Chinese Foreign Ministry statement with this tweet: “With its intruding troops now firmly entrenched in at least three areas across the Line of Actual Control with India, China is sitting pretty, which explains its statement that the overall border situation is ‘stable and controllable.’ In talks, it refuses to budge an inch.”

Chellaney wrote that Modi’s response has been muted to avoid any use of force. “If the Modi team acknowledges the incursions, it will come under huge public pressure to evict the encroachers. But any use of force will lead to at least a localized military conflict. Facing only unpalatable options, a reticent New Delhi has gone in for a counterforce buildup.”

IMF warns against rush to bring manufacturing home after pandemic

Thu May 28 , 2020
TOKYO — International Monetary Fund representatives on Thursday warned countries and corporations against the impulse to bring manufacturing home in the aftermath of the coronavirus pandemic, but struck an optimistic note about the fate of the financial sector. Reshoring is “a vicious cycle that will shrink the global supply chain […]