MUMBAI — The U.K. High Court may have denied an appeal against extradition by Indian businessman Vijay Mallya, but it could still be some time before Delhi authorities get their hands on the fugitive who is planning on challenging that decision.

Law enforcement agencies in India accuse Mallya of allegedly diverting bank loans given to his now-defunct Kingfisher Airlines to his Force India Formula One racing team and other businesses. He is also being charged with misleading banks to get those loans.

The ex-billionaire owes banks an estimated 90 billion rupees ($1.2 billion), following the collapse of Kingfisher Airlines in 2012.

The U.K. High Court rejected Mallya’s appeal on April 20 against a 2018 decision by England’s chief magistrate, Judge Emma Arbuthnot, that he should be extradited to India. Former Home Secretary Sajid Javid, too, had authorized Mallya’s extradition. He was briefly arrested by Scotland Yard but released on bail within hours.

Mallya has the right to file an appeal with the Supreme Court within 14 days challenging the High Court ruling. Otherwise, he faces deportation to India within 28 days.

The liquor baron fled India in 2016, just before a State Bank of India-led consortium of 17 banks approached the local Supreme Court to stop Mallya from leaving the country.

Indian law enforcement agencies allege that Vijay Mallya diverted bank loans given to his now-defunct Kingfisher Airlines to his Force India Formula One racing team and other businesses.

Mallya denied fleeing and said he traveled to the U.K. on business. He still maintains that he offered to repay banks but failed to get a response. “The banks have already recovered in cash a sum of [25 billion rupees] which is 50% of the principal amount. I have repeatedly offered to repay the banks in full but, sadly to no avail,” Mallya tweeted on April 21.

The recent U.K. court ruling brings him a step closer to being prosecuted back home. But Mallya said he would explore legal options to challenge the order.

Mallya was once a celebrated businessman in India. At his peak in 2007, Forbes magazine estimated his net worth to be at $1.6 billion after he acquired Scottish distiller Whyte & Mackay and India’s then-largest budget carrier Air Deccan. He fell from that list of billionaires in 2012.

Born to Bangalore-based businessman Vittal Mallya and his wife Lalitha Rammaiah, the now-bankrupt tycoon had inherited his father’s conglomerate United Breweries Group in 1983 when he was 28.

Mallya first focused on growing the group’s core liquor business. United Spirits, now owned by Diageo, is the world’s second-largest liquor company by volume, while Kingfisher beer maker United Breweries is the largest in India. The slogan “The King of Good Times” printed on the beer bottles became synonymous with Mallya.

Buoyed by the success of his alcohol business, Mallya launched Kingfisher Airlines in 2005, a luxurious full-service airline. Some experts questioned his decision to run a business in which he had no experience but such advice fell on deaf ears. At one point, his airline became India’s second-largest by the number of passengers.

“[Mallya] was a visionary and [had] taken the company to the heights of making Kingfisher one of the world’s largest beer brands. He was an expert on brands,” said TRA Research CEO N Chandramouli. But he stressed that paying a high price for Air Deccan was one of the bad decisions that undid Mallya. 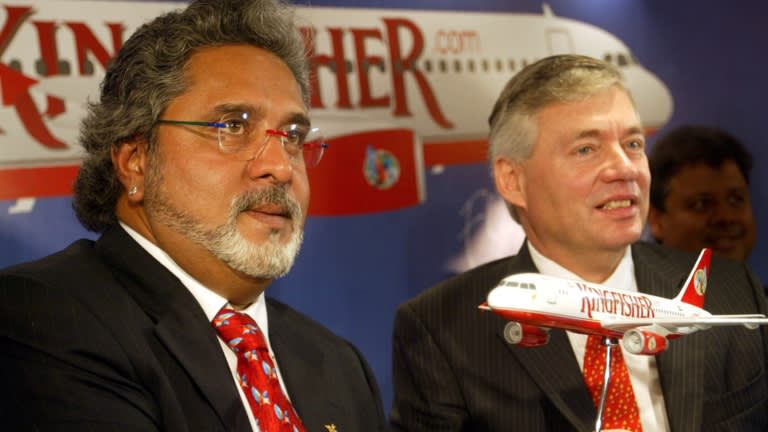 Mallya, left, poses with then Airbus Chief Commercial Officer John Leahy at a news conference in Mumbai in 2004. His Kingfisher Airlines was, at one point, India’s second-largest airline by passenger numbers.

Mallya’s flamboyance was another reason why he drew so much flak, especially in a country where austerity is considered a virtue. Despite owing banks billions, Mallya did not give up a showy lifestyle of parties and extravagance.

“If you flaunt your yacht, massive birthday bashes, et cetera, even while owing the system a lot of money… it seems to suggest that you don’t care. I think that is the wrong message to send out,” former Reserve Bank of India Gov. Raghuram Rajan had said in an interview with a local TV channel in early 2016, before Mallya’s escape, without naming Mallya. “If you are in trouble, you should show that you care by cutting down your expenses.”

Reliance Securities analyst Ashutosh Mishra pointed out that banks had already written off bad loans related to Mallya. “Whatever [banks] can recover now will be a profit for them. But unless the pending cases are not concluded, [banks] will not be able to show the money in their account and close the chapter,” he said.

Mallya’s fate will be closely watched as India also seeks the extradition of some other fugitive businessmen such as luxury jewelry maker Nirav Modi and his uncle Mehul Choksi of Geetanjali Jewellers. Both men are on the run over allegations that they had fraudulently acquired letters of undertaking worth $1.8 billion from India’s second-largest public sector lender Punjab National Bank in 2018.

Lalit Modi, a former chief of Indian Premier League short format cricket tournament Twenty20, is also a fugitive. He was accused of cheating and embezzlement in 2010. Chetan Jayantilal Sandesara and Nitin Jayantilal Sandesara, directors of Sterling Biotech, have also made high-profile exits, in 2018. They have been accused of bank fraud in a case involving 50 billion rupees.

“Mallya’s case,” TRA Research’s Chandramouli said, “will also be an example that the Indian government would like to portray the right optics in dealing with big businessmen accused of wrongdoing.”