TOKYO/ SEOUL — After weeks of staying home during Japan’s coronavirus state of emergency, Matsuko Higuchi just wanted to have her hair styled.

So the 84-year-old left her home in Ota Ward, on the outskirts the capital, and boarded a train for the roughly 40-minute journey to central Nihonbashi.

“I came to get a perm since I wasn’t able to during the restriction period,” said Higuchi, who was among several people waiting outside the reopened Takashimaya department store on Wednesday.

Outings like these show crowds starting to gather in Japan again after the government lifted the last remnants of a nationwide coronavirus state of emergency on Monday. But worries about a second wave of infections are palpable, stoked by the experience of South Korea, which has reimposed social distancing rules in Seoul in response to a flare up of COVID-19 cases.

Like Higuchi, a man outside the store was making a rare trip out of his home.

“I am scared [of the virus] because I have a chronic illness,” the 76-year-old said.

The statue of the faithful dog Hachi, a popular meeting place near Tokyo’s Shibuya Station. (Photo by Kei Higuchi)

On Friday, young people gathered as usual around the statute of Hachiko the dog at Tokyo’s Shibuya Station, a popular meeting point, on Friday.

“I do feel scared that the numbers [of COVID-19 cases] are rising again,” said a university student Daiki Okutsu, who was waiting for his friend at Shibuya. The daily number of confirmed cases in Tokyo on Friday surpassed 20 for the first time in about two weeks.

Even so, Okutsu and his friend Keita Kuroiwa said they decided to visit a friend because the emergency was lifted. Asked about his plans, Kuroiwa said: “I want to go to shopping malls.”

Tokyo announced Friday it would further loosen restrictions from next week, allowing shopping malls, cinemas and gyms to operate. Restaurants extended business hours until 10 p.m. earlier this week, and schools are also looking to gradually reopen. As people gingerly return to their normal lives, they face a possibility of second or third outbreaks, as seen now in South Korea.

The South Korean government loosened social distancing rules from May 6, letting national museums and libraries open. The decision followed a low number of new daily cases of coronavirus infections, which hit 18 on April 18 and had stayed under 20 for three weeks after that.

The country was almost back in full swing. A bullet train from Seoul to Busan was sold out on May 8 as South Koreans celebrated Parents’ Day. One of the passengers, a woman her 20s, carried a present for her parents. The sight was in stark contrast from weeks earlier, when only a handful of people could be seen on the KTX rail line.

On May 5, baseball fans rejoiced as the country’s professional league started with televised games that were also broadcast in the U.S. Although fans were not allowed to go to the ballpark, they could enjoy live games, which had been suspended for more than a month to stop the spread of the coronavirus. 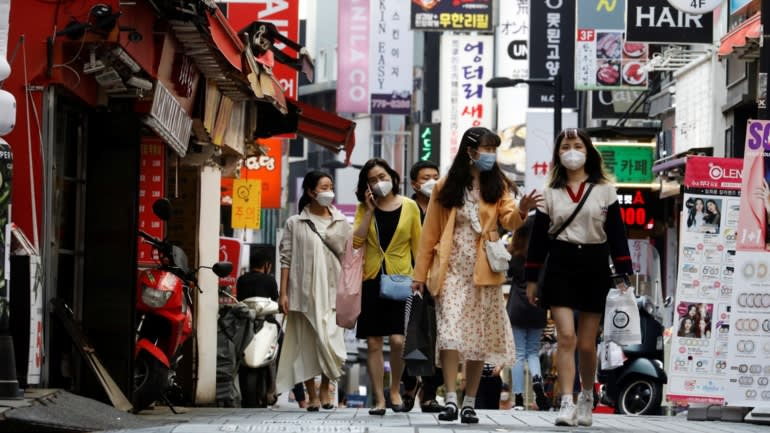 Seoul’s Myeongdong shopping district on May 28: The South Korean government has re-instated some social distancing restrictions after a fresh cluster of COVID-19 cases.

But with life seemingly back to normal, the number of new daily cases reached 79 on Thursday, marking the biggest number in almost two months. On Friday, there were 58 new infections. The spikes were largely due to a cluster infection at a logistics center of e-commerce company Coupang in Bucheon, west of Seoul. So far, 102 infections have been linked to the center.

A cluster infection this month connected to nightclubs in the capital’s Itaewon district sparked worries about a second wave. So far, 266 people in the district have been confirmed as having COVID-19. Among them, 96 were infected after going to the venues, with 170 catching the virus secondhand.

In response, the government has strengthened social distancing rules in the Seoul metropolitan area for two weeks, closing public facilities such as museums, libraries and galleries. Bars and coin karaoke booths were also ordered to shut down.

The re-tightening of restrictions remains a possibility for any country, including Japan. Newly identified infection clusters in hospitals of in the city of Kitakyushu, near Fukuoka, and Tokyo this week set an ominous tone for the country.

Tokyo has issued benchmark criteria for bringing back restrictions, including the daily number of cases being higher than 20. After the number hit 22 on Friday, Gov. Yuriko Koike described the level as “a bit high” in an online broadcast. “The virus has not disappeared,” she warned, calling on the public to adjust to a “new everyday life” rather than old routines.

Both Prime Minister Shinzo Abe and his government’s coronavirus panel said a second state of emergency could be announced at any time. Panel member Shigeru Omi, a former World Health Organization official, said this month that such a decision should be made before the situation worsens to the point where the first declaration was made on April 7.

On Monday, Abe said one of the best ways to keep the number of infections low and avoid further restrictions on business activities would be to launch a smartphone tracing app, along with other measures such as expanding testing capacity.

The government panel said Friday it expects COVID-19 clusters to appear in the future and people should expect a lengthy fight against the coronavirus.

“Since infections have simmered down, now is the time to prepare for the next wave” by building capacity in health care and other areas, Omi said.