SINGAPORE — Roshni Mahtani Cheung is solving a lot of problems for Asians with toddlers and small children. The 36-year-old CEO of theAsianparent, Southeast Asia’s biggest parenting website, says it is “like an encyclopedia” for them.

As an example, Mahtani rattled off a few of the questions often asked by pregnant mothers. “Can I breathe secondhand smoke? Can I wear a bra? Can I wear a ring?” she said, while demonstrating how the company app works.

Her website got off the ground in 2009 while she was living in the U.S. and continued after she returned to her native Singapore. The city-state was still suffering from the aftereffects of the global financial crisis.

“I think when you’re younger, you have a lot more bravado versus now where I have responsibilities,” she said, looking back on the challenges she overcame. Today, as the head of a growing company with 250 employees, her focus is on weathering the economic slowdown caused by the novel coronavirus pandemic.

About a decade after its launch, theAsianparent has 33 million users. Site traffic really grew after rolling out localized versions for Indonesia, Thailand and Malaysia and other Southeast Asian countries.

Mahtani said the site is well suited for parents in emerging countries. “What happens is that there isn’t good content in the local language, and if they don’t understand English, how will they know the right practices?”

The success of the site has driven her to expand beyond the region, into India and Sri Lanka. “Now we think this year we’ll hit 50 million users,” she said.

Mahtani first got the idea for her company while living in the U.S. After graduating from college there, she worked part time as a babysitter and was surprised at how American parents disciplined their kids. One parent she recalled would say something like, “Maybe there’s a better way of behaving,” instead of a sharp “Don’t do that!” as her parents would have scolded.

As an Indian raised in largely ethnic-Chinese Singapore, Mahtani is no stranger to being a minority. But that was just the start. “Leaving Singapore made me realize how Asian I was,” she said.

Mahtani thinks many young Asian parents feel conflicted about how to raise their kids. Now living in relative wealth compared to when they grew up, they have absorbed Western values like personal freedoms and individualism. These run contrary to Asian society, with its emphasis on the group and uniformity. And it does not help that they are constantly reminded of this by well-meaning relatives and peers.

The company resolves this dilemma, giving Asian parents a space where people with similar issues and problems can connect. There they find answers to common questions, such as what clothes to wear while pregnant and how to set up a good home.

TheAsianparent also offers translations of studies from Europe and the U.S., with added explanations for context. There is no charge for use, as the site makes money through ads and sales of user survey results.

Mahtani says content of theAsianparent changed after she became a mother.

Although Mahtani shares lots of information on Western-style parenting, she mixes it with a good dose of country-specific culture. For example, each localized version contains a forum page where users are encouraged to exchange their own recipes made with local ingredients.

Despite the crowded competition, theAsianparent has become the go-to site in part for its strict management of user forums. In contrast with many freewheeling U.S. forums that are often riddled with snark, the company wants users to interact without fear of criticism or ridicule. Any comments that run afoul of house rules are instantly deleted and their authors warned.

“Unlike Facebook and Google — which say they value free speech — we say, ‘No free speech!’ We control everything,” Mahtani said jokingly.

Political comments are also forbidden, with the huge number of posts monitored by a small army of moderators backed by artificial intelligence. About 5% of users have received a warning at one time or another.

Mahtani’s experience raising her own daughter, whom she delivered at the age of 33, also guides her business philosophy. She knows that parents are eager to find out how others are raising their kids, but do not want to be criticized for doing things their own way. This is the central tenet of her website, and why Mahtani believes it has become a hit.

“Parenting is so hard. You don’t want people judging you for your decisions,” she said. 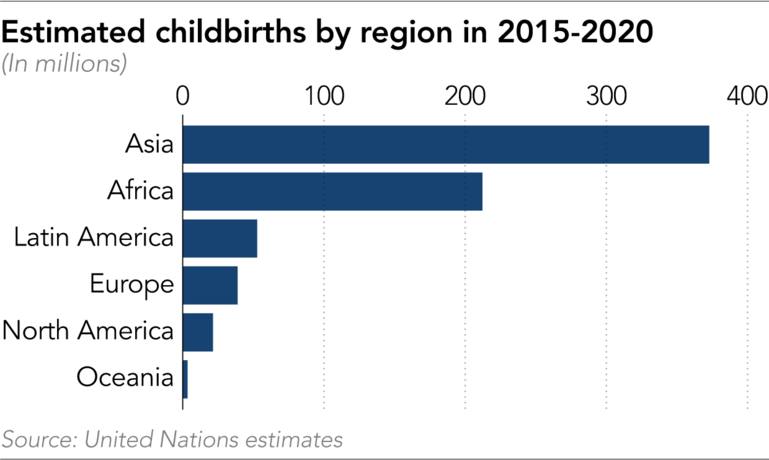 Asia is becoming an opportunity for parenting support services. According to the United Nations, childbirths are expected to reach about 373 million, or 53% of the world total, from 2015 to 2020. The figure for Southeast Asia — theAsianparent’s key market — is 57.28 million, topping Europe’s 38.84 million and North America’s 21.43 million.

People in Asia are avid internet users, which makes the region fertile territory for information sites like theAsianparent. According to U.K. research company We Are Social, the average time spent online per day is nine hours and 45 minutes for Filipinos and about nine hours for Thais — both over two hours longer than the global average of six hours and 43 minutes. About 200 million people in the regions had their first exposure to the internet over the past year, led by Indians and Indonesians.

Urbanization has rapidly progressed in the region, making it difficult for new parents to obtain support with parenting. This has become especially apparent during the novel coronavirus pandemic, as more movement restrictions go into effect and more people are forced to stay at home. This increases the importance of timely and reliable online information.

TheAsianparent now has its sights set on corralling the African market, where childbirths are expected to exceed Asia in the second half of the century. It recently launched localized versions for Kenya and Nigeria as Mahtani explores parenting beyond the Asian sphere.