Now that the 2020 Tokyo Olympics and Paralympics have been postponed to 2021 in the wake of the novel coronavirus pandemic, Naomi Kawase, Cannes Film Festival prizewinner and official film director for the games, offers her thoughts on how we can survive the crisis and what society might look like afterward.

As preparations were underway for holding the Olympics in Tokyo in the summer of 2020, the first in Japan’s capital for 56 years, I was selected to shoot the official film for the event. I began to gather information mainly through interviews with people involved in the autumn of 2018.

Toward the end of 2019, official competitions to choose athletes for the games in the 33 sports that make up the Olympic program were being held in countries around the world. It is not just a physical effort, these athletes training and competing; their endeavor contains an aesthetic appeal too, ripe for the camera.

Thomas Bach, president of the International Olympic Committee, is himself a former Olympian who won a gold medal in fencing. While athletes should pursue medals, he says it is wonderful when they respect opponents they have competed against. Friendship fostered beyond boundaries, between countries with different cultures, is invaluable, he says.

But Japan encountered a situation that forced it to abandon its 7-year preparations only four months before the start of the event, which was going to be greeted with global jubilation. 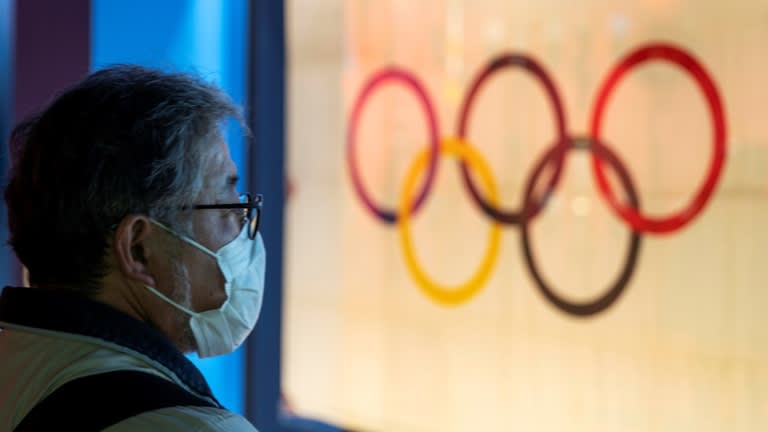 A man looks at an Olympic flag used for the 1964 Tokyo Games at the Japan Olympic Museum, in Tokyo on Feb. 26.

Now that the Tokyo Olympics will be delayed by a year, a pressing issue is whether the new coronavirus can be controlled in time. The Japanese government and Tokyo Metropolitan Government have set up anti-infection teams of experts who are striving day and night to put the coronavirus to rest. Japan, happily, avoided a serious first wave of infections.

But Japan took time to introduce restrictions on overseas travel and close its borders while countermeasures were short of perfection. As a result, Japan has failed to prevent the arrival of a second wave and has declared a state of emergency.

Unlike the U.S. and European countries, Japan is legally unable to lock down cities. The government thus has issued a nonbinding, “voluntary” request for quarantine. Changes in behavior are sure to follow as citizens follow this request.

I live in Japan’s ancient capital, Nara, 500 km south of Tokyo, and engage in creative activities there. As my clients and staff members live in Tokyo, I usually communicate with them via videophone. I have also built up a staff in France over the past decade and work remotely with them, despite the time difference. A security guard walks on a closed street lined with cherry trees in full bloom, in Tokyo’s Ueno Park on March 28.

A locally based life in a place that offers fresh air and is friendly to child-rearing is pleasant — especially now. Achieving this way of life, however, is difficult for people with special occupations, such as filmmaking as in my case, without modern conveniences.

Needless to say, I, like other people, have a sense that it is good to communicate face to face with a person, understand his or her thoughts through their eyes, and deepen and maintain relations with them. I think that communication should be rightly so.

But as the number of people I meet like this increases, I have been able to spare only a moment for each. In addition, so much time is needed for traveling to meet them. I felt, then, as if I was spending too much time for an ephemeral relationship and recognized that I have no time to calm myself.

Worse, I can take little time to spend with my family and thus become unable to understand what they are doing and how they are feeling. In particular, this question becomes apparent in the parent-child relationship. Without common topics and activities, a family becomes a mere relationship of people living together. Settling into such a relationship becomes difficult, though it depends on the situation. In this case, there can be no social contribution to the community where the family resides. Reku Matsui, 8, left, and Yaya Matsui, 12, hold up pictures they drew during the outbreak, from their home in Tokyo on April 19.

To prevent the further spread of COVID-19 infections, 40% of people in the world live under a ban on going out. If they now primarily engage in remote work, I think this must make their lives more environmentally sustainable.

As cross-border travel and far-flung food imports have grown, governments, companies and individuals have worked to improve the environment, using principles like the Sustainable Development Goals, by reducing the emission of carbon dioxide, for example. But they have failed to develop into significant reforms.

Now there are reports that the emission of carbon dioxide has dropped by half over the past months as people have voluntarily refrained from activities. But the economic damage caused by the restraint is immeasurable. The contradictory threats of virus and poverty hang heavily on us in modern society.

It is impossible to guarantee absolutely equal happiness for every person in society. Rules for everyone may run counter to someone’s happiness. Nevertheless, with imagination, we can establish new ways of living in and after our current contingency. Japanese Olympic torchbearers run through the rain on their way to Tokyo’s National Stadium in October 1964.

Politicians should not only pay attention to health care personnel engaging in front-line work to save lives day and night but also remove any discrimination against infected people and their families by promptly informing citizens of how to understand the situation and act correctly. People develop a sense of discrimination against infected people out of temptation to protect their loved ones.

People do not discriminate against the weak alone. They may join with others who have the same ideas to oust people with different ideas. If this behavior emerges widely, discrimination turns into division and makes it difficult to reconnect relations. Eventually, people are hit by loneliness and despair.

In this case, people begin to seek mental relief in religion and art, as shown by history. They do so because religion and art give them a moment in which they receive better ideas for life and feel uplifted. In other words, people who have lost their will to live find a band of light in the darkness.

A scholar of human ecology recently pointed out four threats in the 21st century — nuclear, climate change, depletion of resources and economic disparity. While all of them have been created by humans, he said there is a slim chance of getting rid of them. In other words, the risk of failure is almost equal to that of success.

The human ecologist saw himself as an optimist who sided with that slim chance of success. I consider myself an optimist too. 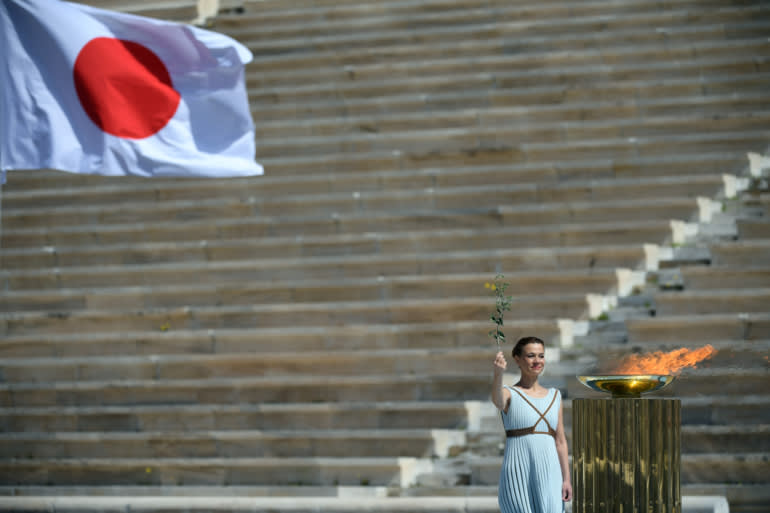 A perfomer stands next to the Olympic flame in Panathenaic Stadium, in Athens, Greece, on March 19 during the handover ceremony for the 2020 Tokyo Games.

Whether the postponed Olympics can be held depends on how the new virus will be contained and how our subsequent way of life will be changed. But there remains the chance of failure.

I do hope that the opening ceremony of the Olympics will be held in a manner which overcomes the divisions we are sure to soon experience and confirm the genuine bond and coexistence of people. I hope that the holy Olympic flame will burn brightly there and remain in people’s minds.

As an optimist, I want the Olympics to be a unifying force that enables people to enjoy getting together in the same place beyond barriers and differences.

Naomi Kawase is an internationally active Japanese film director who won the Grand Prix with “Mogari no Mori” (“The Mourning Forest”) at the 2007 Cannes International Film Festival. She has assumed the post of official film director for the 2020 Tokyo Olympics.

Tue Apr 28 , 2020
Rishi Sunak has launched a new “Business Bounce Back” loan scheme for more than 5 million of Britain’s smallest firms following massive pressure over fears they were being  failed by Treasury rescue efforts. The Chancellor’s new lending programme will be backed by a 100pc taxpayer guarantee and is intended to […]