TOKYO — The coronavirus pandemic has accelerated the development and adoption of technology that aid online sales, giving a boost to Chinese startups in fields such as contactless payments and video monitoring.

While Japan, the U.S. and some countries in Europe are still fighting the pandemic, China, from where the outbreak originated, has resumed economic activities. Yet, the previous way of life may no longer be sustainable amid fears of a return of the disease.

Some startups are responding to such changes by hastening their development plans.

Shanghai Ulucu Electronic Technology, founded in 2009, is a pioneer in the field of video monitoring systems designed for retailers in China. While the number of visitors to stores has sharply decreased due to lockdowns in the country, Ulucu said its systems that employ artificial intelligence will come in useful as social distancing becomes the new normal.

As the coronavirus infections surged in China in January, Ulucu said its systems could help to minimize contact between workers. “Investment in AI and digitization of shops will further increase especially among big companies,” said Shen Xiuping, chairman and CEO of Ulucu.

Indeed, Chinese internet company Tencent Holdings has invested an undisclosed amount in the startup which hopes that it can use its systems to match shoppers to services and products to help boost sales.

AI also allows retailers to analyze customer traffic on a real-time basis. Around 450,000 shops in China have adopted Ulucu’s systems that revealed the number of customers to those stores dropped to less than 10% in February but has rebounded to more than 70%, according to Shen.

The contactless payments sector is also benefiting from an increase in online shopping and social distancing. Beijing Inspiry Technology, founded in 2002, has captured 70% of the Chinese market for Quick Response or QR code readers for mobile payments at restaurants and other shops.

Although the use of facial authentication systems has been increasing in China, the rising use of masks has rendered the technology unworkable and given companies more reason to resort to QR code payments.

“While QR code payment via smartphone is widely used in China, vending machines are not as common here as in Japan,” said Wang Yue, chairman of Inspiry. “The coronavirus outbreak has demonstrated demand for vending systems, such as mask dispensers. The retail industry as a whole is in favor of new payment systems.”

Inspiry had experienced a slowdown in business talks until March amid the spread of COVID-19 infections. “But we are busier than before in some operations,” Wang said, noting that companies are introducing IT-based measures to stimulate consumption such as the issuance of discount vouchers combined with QR code payments.

Demand for QR code payment is strong not only in China but also in other Asian markets. Earlier this year, Inspiry won a large order from Paytm, the biggest mobile payment system company in India.

“We are advancing business talks also in Indonesia and Turkey. I believe cashless payments will take hold in the whole of Asia not only for preventing coronavirus infections but also as an economic measure after the pandemic,” Wang said.

Sha Tao, CEO of Applesay, said that the coronavirus outbreak has prompted many retailers to launch livestreaming sales.

“Retailers greatly increased live streaming-type marketing to introduce merchandise during lockdowns and we have developed a function to support the marketing,” said Sha. “It is a technology to help them reply to questions and comments from viewers by immediately picking products and services that meet their needs.”

The Shanghai-based startup has accumulated big data about consumers’ buying habits and has used it to stimulate online shopping. 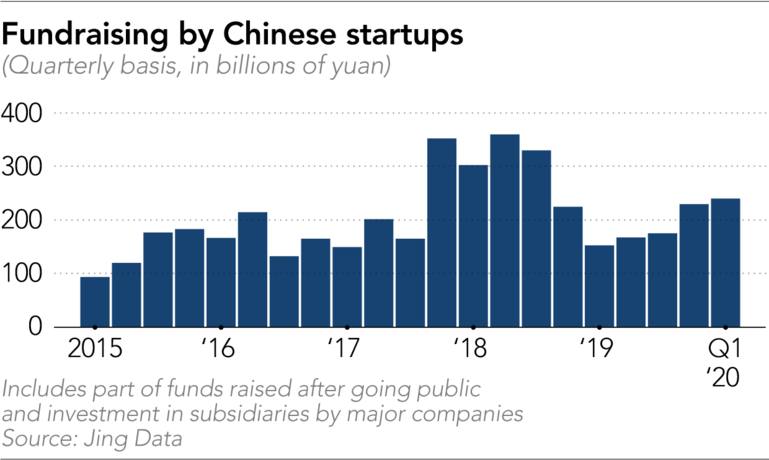 Despite the potential for growth, fundraising has become tougher in the current economic climate.

A survey by Jing Data, a unit of Chinese technology new portal 36Kr Holdings partly owned by Nikkei, found that emerging Chinese companies raised a total of 240.2 billion yuan ($33.78 billion) in the first quarter of 2020. But that amount included some 100 billion yuan from regional banks that have fallen into financial difficulties. Stripping out that sum, fundraising by startups has in fact fallen from a year earlier.

The three startups interviewed by Nikkei said they have more in the coffers but admitted that the fundraising landscape has become harder to navigate. Applesay’s Sha said: “The fundraising environment is growing tougher for the restaurant and tourism industries.”