SINGAPORE — New Zealand says it has effectively eliminated the coronavirus. Now comes the challenge of managing the political fallout.

Prime Minister Jacinda Ardern enjoyed near-universal support as she shut the country’s borders, kept residents home and ordered nearly all physical stores to close in late March. The measures worked and as of Thursday, New Zealand had confirmed just 1,139 COVID-19 infections and 21 deaths. On Monday and Tuesday — a week after the government relaxed measures, allowing construction to resume and restaurants to offer takeout — the country went two 24-hour periods without a new case.

Ardern, whose calm and optimistic television briefings have been particularly acclaimed, is reaping the rewards. Recent polling indicates that her Labour Party now has the backing of 55% of the electorate, up from 41% in February. The opposition National Party, which had a small lead before the pandemic, registered just 29%.

“The climate is like wartime and people are proud of the prime minister,” said Bryce Edwards, a politics researcher at Victoria University of Wellington. “The Labour Party is the only game in town and Ardern is overshadowing all her colleagues.”

Ardern’s political rivals, however, have ended the detente and are ramping up criticism ahead of an election scheduled for September. Just as South Korea’s recent paliamentary election was closely watched across the Asia-Pacific region, New Zealand’s upcoming poll will be an indicator of how an electorate responds to a lockdown.

And as popular as Ardern is, her opponents do have potential lines of attack.

A worker conducts a temperature check at the entrance of a construction site in Wellington on April 28, after the country’s lockdown measures were eased.

Simon Bridges, the beleaguered opposition leader, has repeatedly called for the lockdown to be loosened faster while unfavorably comparing New Zealand’s response to that of neighboring Australia’s, which has a comparable number of cases per million residents despite more relaxed measures. The government could announce as soon as next Monday when businesses can reopen with social distancing.

“We have now started to return to normality, with differences of opinion between parties on what should happen next,” said Janine Hayward, a politics professor at the University of Otago, adding that the Greens and the populist New Zealand First party, which govern in coalition with Labour, are likely to further detach themselves in the coming months to distinguish themselves politically.

New Zealand had fared poorly in a 2019 review of pandemic preparedness, and the government’s health care policies will be scrutinized in a campaign inevitably colored by the coronavirus. Health care unions, for instance, initially complained of insufficient personal protective equipment. “Due to inadequate pre-pandemic preparations and low ICU capacity, we probably had little choice [but to go into lockdown],” said epidemiologist Nick Wilson, who is broadly supportive of the government’s efforts.

Westpac forecasts that the economy will shrink 16% in the second quarter as unemployment rises to 9.5%, the highest level in 27 years. The NZX50 Index is down about 10% since Jan. 3, though it has recovered sharply in the past month. About a fifth of restaurants could permanently shut down, translating to 12,000 jobs being lost, said Marisa Bidois, chief executive of New Zealand’s Restaurant Association.

New Zealand has enacted NZ$23 billion ($13.9 billion) worth of fiscal support, equating to 7.7% of gross domestic product, according to International Monetary Fund data. The outlays include a wage subsidy scheme that will cost in excess of NZ$10 billion and a program to provide loans to small businesses. The central bank is undertaking quantitative easing for the first time and buying NZ$33 billion of government bonds over 12 months. 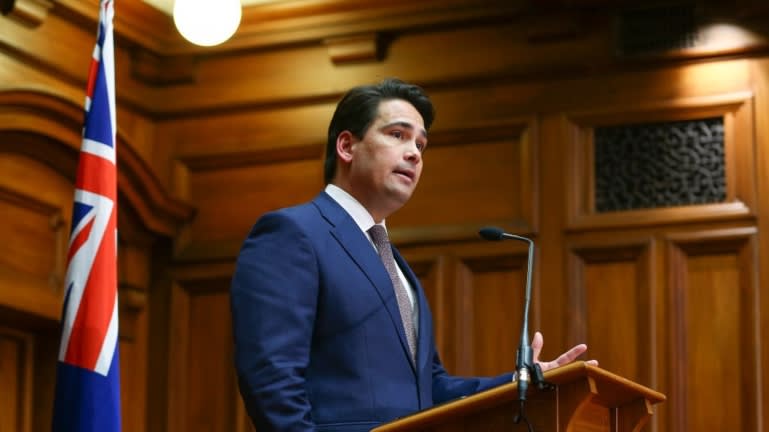 Simon Bridges, the leader of the opposition National Party, has repeatedly called for the lockdown to be loosened faster while unfavorably comparing New Zealand’s response to Australia’s.

Tourism and farm produce, New Zealand’s two major exports, have been particularly affected but the government is discussing a “travel bubble” with Australia that could see citizens from both countries cross borders with minimal restrictions. The Oceania neighbors are also working on guidelines to allow for some travel with South Korea, Canada and Singapore.

“There’s some justification for Australia to think it’s been more successful,” said Chai Chuah, New Zealand’s former director-general of health and a critic of the current government. “COVID-19 is the tip of the iceberg and in focusing on it, we’re crushing the economy and denying people with other health issues getting services. All this will come back and haunt us.”

“There was going to be an economic impact no matter what,” Julie Anne Genter, a Green lawmaker and junior health minister, told the Nikkei Asian Review. “Even if you didn’t tell people to stay in, they wouldn’t be eating out because of worries around COVID-19.”

The government is expected to announce further fiscal measures when it unveils a budget on May 14, and it has more firepower. Ardern inherited a growing economy in 2017 and has steadily reduced net debt to just 19.2% of GDP, the lowest level in nearly a decade. All three major rating agencies recently reaffirmed New Zealand’s AA credit rating.

“In the next few weeks, a whole range of people are going to experience poverty for the first time,” said Shamubeel Eaqub, an economist at Sense Partners who is pushing for more aggressive financial support, particularly to address New Zealand’s affordable housing crisis. “There was real social license for the welfare state after the Great Depression and it feels like there’s an opportunity for it to happen again.” Junior Health Minister Julie Anne Genter’s Green Party is expected to move to differentiate itself from its Labour coalition partner ahead of the election.

New Zealand has received outsized international attention under Ardern’s government for progressive laws like paid leave for domestic violence survivors and a commitment to reduce carbon emissions to net zero by 2050. The question now is if the commitment to sustainable economic growth has weakened in tougher economic times.

The government has indicated that it will prioritize “shovel-ready” infrastructure projects and is set to pass a law fast-tracking building plans and removing public input before approvals. But such industries are predominantly staffed by men while the badly hit hospitality and retail sectors tend to be female and minority dominated.

“We have an opportunity to build a better world and respond to the climate crisis,” said Genter, who also manages transport and women’s issue portfolios. “It can’t just be shovel-ready projects in construction and energy. … I’m keen to ensure there’s an intersectional lens of equity at the heart of our economic response.”