TOKYO — “I’ve got one, bring me more bait!” a fisherman roared while pulling his catch aboard the Mitsumaru. Three rookies obliged, dodging the fish zipping past their faces like bullets.

Sutriyo, Faizin and Dadang came to Japan during the winter after graduating a fisheries high school in Indonesia. They began a three-year stint as foreign technical interns in March aboard the Mitsumaru, a fishing boat based out of the southern Japanese city of Tosa.

The three interns work from sunrise to sunset as the boat chases schools of bonito, a smaller relative of tuna. At night, they take turns keeping watch and ensuring the boat stays safe.

The work is hard, and they spend little time on land. But the pay — about $1,500 a month — is several times what their parents make back home.

“It’s all for our families,” the trio frequently remind each other.

“My mother worked so hard to raise me, and I want to buy her a rice field,” Sutriyo said.

From left to right, Sutriyo, Faizin and Dadang listen intently to instructions from the captain aboard the Mitsumaru.

Japan was the world’s top fishing nation in the 1980s. But many boats have been grounded as aging owners struggle to find someone to take over. The number of workers in the fishing industry has fallen by two-thirds to about 150,000.

Once-vibrant fishing towns face an exodus by their younger generations, who chase jobs and other opportunities in big cities like Tokyo. Fishing boats rely instead on foreign technical interns, who are part of a Japanese government program ostensibly designed to provide on-the-job training to workers from developing countries.

More than 1,700 interns worked on Japanese fishing boats last year, according to the Fisheries Agency. 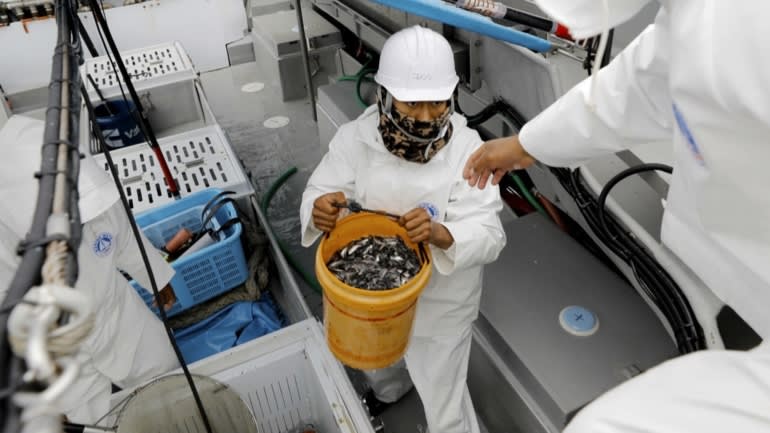 Faizin carries a bucket of bait. He is still learning the ropes of the trade.

Five of the Mitsumaru’s nine crew members are foreign interns.

“Even when we advertise at our local fisheries high school, almost none of the students are interested,” said the boat’s captain, Takashi Okamoto. “Without the interns, this business wouldn’t survive.”

With Japan’s population continuing to decline, the government debuted a new skill-based visa last year in an attempt to plug labor shortages. The fishing industry in particular hopes to lure up to 9,000 foreigners over the next five years. But Japan is not the only advanced economy clamoring for more workers, and the competition can be steep. Takashi Okamoto teaches an intern how to fish using a pole and line. “I look forward to their growth like they’re my own sons,” he said.

Japan conducted its first qualification exam for the new visa in Jakarta during January. Indonesia ranks as the world’s second-largest fishing nation, and the country also provides the majority of Japan’s foreign interns.

“These days, our students are more interested in South Korea, which pays more than Japan, or Taiwan, where it is easier to obtain a visa,” a local fisheries school teacher said. 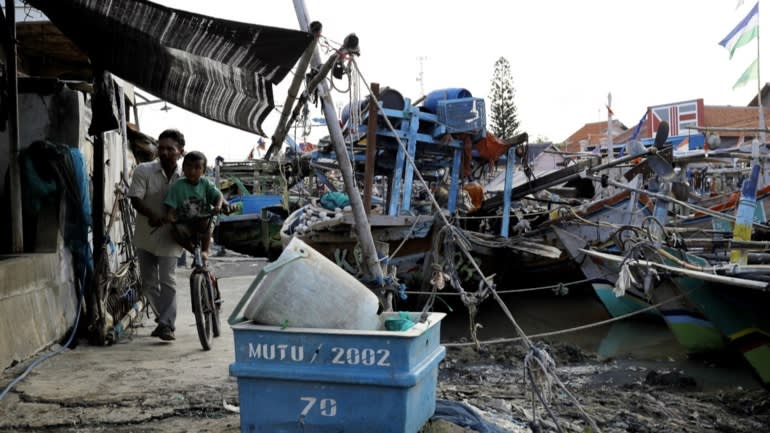 The Indonesian port city of Cirebon, about 300 km east of Jakarta: Many local fishermen work in South Korea or Taiwan for several years to save up for their own boat back home.

“Co-ops across the country are crying for help,” an industry insider said.

An intern who was supposed to join the Mitsumaru’s crew in April was stopped from leaving his home country as well.

“If the flow of foreign interns freezes for a long time, we won’t be able to plan for the future,” Okamoto said as he watched the boat’s interns practice casting a line.