Countries across Asia and worldwide are hammering out a combination of bilateral and multilateral arrangements to get passengers flying again. But the stakes are especially high for tiny islands that depend on tourism for 20% to 90% of their economies. With the Southern Hemisphere’s peak season approaching, furious lobbying and policy experimentation are in full force.

French Polynesia, home to postcard-perfect Bora Bora and Tahiti, is poised to become the first in the world to lift border restrictions entirely. The government plans to open to travelers from all countries from July 15, provided they pass a COVID-19 test three days before arrival and are willing to submit to another test four days after landing.

The bold move by the French collectivity is dividing experts but is likely to be a tempting model.

Border control is one of five areas on which France still determines policy for otherwise autonomous French Polynesia. The local authorities’ move to allow free entry, a government source said, caused great consternation among the French and took weeks of tense negotiations between Paris and Papeete.

The archipelago of more than 100 islands had a total of 60 confirmed cases but no deaths and was declared coronavirus-free on May 19. Risking a breakout in a far-flung territory — after France’s own struggle to contain a disease that had claimed 29,000 lives within the country — was a tough sell. But a recent French government scheme to offer generous tax breaks to tourism investors there doubtlessly gave the Polynesians’ case some weight.

So did the prospect of economic ruin.

“Tourism accounts for about 20% of our GDP, but what we discovered was its impact across our entire economy,” Nicole Bouteau, French Polynesia’s minister of tourism and labor, told the Nikkei Asian Review. “Our fisheries revenue dropped by 50%; the same thing happened with agricultural production.”

A potential snag, even after July 15, is finding partners to service the route, as commercial flights are slow to rebound.

Japanese authorities are apparently keen on the idea, but flights from Narita Airport, near Tokyo, to Papeete are not expected to take-off until September at the request of a local tour operator the French Polynesian tourism ministry said needed more time to revamp the country’s marketing material.

An Air Tahiti Nui jet at Los Angeles International Airport: The airline has maintained its slot at LAX and flights are scheduled for next month.

Elsewhere in the vast Pacific, countries have pinned their economic hopes on being included in slower-moving multilateral solutions — and are growing impatient.

“It’s unjustifiable for Fiji to be given anything less than equal consideration in any regional travel arrangements,” Aiyaz Sayed-Khaiyum, the country’s attorney-general and minister for economy, told Nikkei. “The full recovery of our crippled services sector, especially our vital tourism industry, is not possible so long as existing travel restrictions remain.”

The minister was referring to the planned trans-Tasman “travel bubble,” which would open up flights between Australia and New Zealand. Documents to sign that corridor into law were on both countries’ prime ministerial desks this week. Both are cautious about expanding the scope of the bubble.

Dave Sharma, a prominent lawmaker from Australia’s governing party and the co-chair of the Australian Parliament’s Friends of the Pacific group, sees a strategic opportunity in deepening economic ties in a region where Canberra has been waging a costly soft-power battle with China for years.

“Strategic competition has not slowed down,” he said. “And it is in our own national interests to be the partners of first choice for countries when they are most in need. We need to maintain the edge that we’ve got [over China]; it would be alarming if we fell behind.” Yet, while Sharma believes the bubble should include Pacific nations, he does not see it happening until the final quarter of 2020 — especially as Australian states are each at different stages of containing the disease. Australian diplomatic sources say the corridor with New Zealand will be used as a model before more nations are added to it.

Likewise, New Zealand, which lifted its domestic COVID-19 restrictions on Tuesday after eliminating local transmission, is in no rush to widen the bubble.

“The potential for a ‘travel zone’ has been discussed at a high level,” a spokesman for the country’s foreign ministry told Nikkei. “However, it remains imperative that we avoid the spread of COVID-19 within the region.”

New Zealand is not only concerned about the risk of importing COVID-19 but also exporting it, despite its current virus-free status. There is a history of travelers from New Zealand carrying diseases to Pacific islands — one brought measles to Samoa, sparking an outbreak that claimed 83 lives, mostly infants.

But countries like Fiji, where 800 workers were recently laid off from the national air carrier, insist that delays are doing irreparable damage to their economies and could push them in new directions diplomatically. “We’re actively exploring other avenues,” Sayed-Khaiyum said. 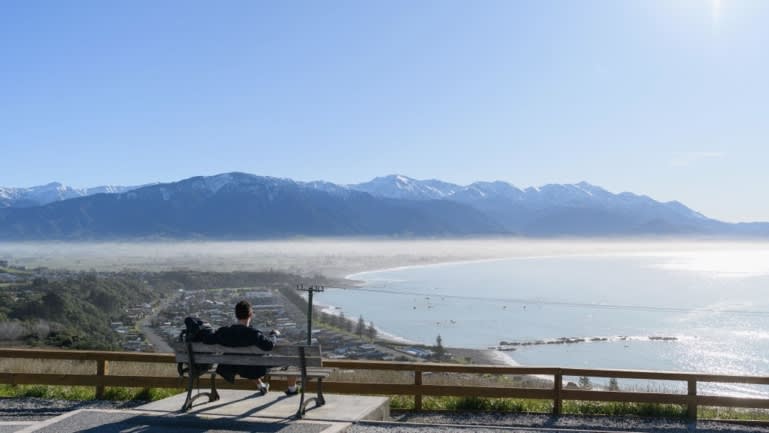 New Zealand is not only concerned about the risk of importing COVID-19 but also exporting it, despite its current virus-free status.

Some experts say the focus on creating an air alliance with Australia makes no sense. Ten of the 12 countries and territories that have never recorded a COVID-19 case are in the Pacific.

Samoa and the Solomon Islands, which has also remained free of the virus, are lobbying in earnest for bubble inclusion. The chief of Samoa’s Ministry of Finance told reporters on Friday that the country’s “clean” status would give it a competitive edge.

The finance minister of the Solomons, Harry Kuma, told Nikkei that he was keen for the country to begin accepting tourists once more. The islands are looking to tourism, which registered growth of more than 70% from 2014 to 2018, to overtake logging as the country’s main export.

“Solomon Islands is still COVID-19 free and would like to maintain this position. But we cannot continue to lock ourselves up for the sake of [it],” Kuma said. “We can and must ease restrictions.”

South Pacific destinations like these have the most to lose from ongoing travel bans and the greatest incentives to push for opening borders. But their health systems are also vulnerable to being overrun and isolated. This makes French Polynesia’s go-it-alone approach an especially big gamble.

Gary Maclean, a professor of molecular biology at London Metropolitan University, says French Polynesia is taking risks but thinks they are manageable. A negative PCR test, he noted, “is usually a pretty good marker of not being likely to pass on [the] virus.”

“But by not requiring quarantine, they are gambling that anyone negative on the first test would not transmit [the disease] to the population during the four days until their second test,” Maclean said. Other downsides include the possibility of travelers contracting the virus during a long haul flight and running undetected.

For now, all countries find themselves in uncharted territory.

“The reality is we don’t yet have strong evidence on which individual policies work best, but this is a unique chance to learn,” said Blake Thompson, an epidemiologist from the University of Oxford. “Enforced quarantines, like enforced lockdowns, are probably the safest bet in terms of stopping the spread. However, these are blunt tools that may not be necessary.”

It may well turn out that French Polynesia’s plan for screenings before and after arrivals “is sufficient to keep transmission to a minimum,” Thompson added.

Once the tourists start flying in, it may not take long to find out.