YANGON — Sometimes wearing a handmade mask, State Counsellor Aung San Suu Kyi has been making herself more accessible to the public than ever before — even though she has not been physically out and about since April.

After barely using Facebook previously, Suu Kyi has made her new account a daily communication tool as the COVID-19 pandemic bears down on Myanmar’s weakened economy.

The first case of COVID-19 in Myanmar was confirmed on Mar. 23, and came after Suu Kyi had begun visiting ethnic minority areas to build support ahead of national elections due in November.

“I never had any intention of using Facebook,” Suu Kyi said in her first message, explaining that she had resorted to the popular social media platform for “quick and effective contact with people facing COVID-19 challenges.” She said she wanted to lend support to government officials and medical personnel fighting the contagion.

“Some people don’t like wearing a mask because it is hard to breathe or because of the hot weather,” said Suu Kyi. “We need to act like marathon runners and train for this habit.”

Suu Kyi has garnered 2.4 followers on Facebook since April, and her handmade mask posting went viral.

Suu Kyi has Facebook interactions a few times each week, mainly so far with people involved in health care, transportation and education. These last around 40 minutes, and are posted to her Facebook page for general circulation. She lectures on how to confront the virus, sometimes with a smile, at other times more strictly.

In the middle of May, she hosted a handmade mask contest in which participants had to produce their own and post photos. When Suu Kyi revealed her personal handiwork, the response went viral, and some 21,000 people posted theirs.

Suu Kyi opened the new Facebook account on April 1 and has posted messages about COVID-19 almost every day. She already has 2.4 million followers — more than twice as many as Thai Prime Minister Prayuth Chan-ocha’s 940,000. Every post receives numerous comments, most brimming with respect and affection.

“We all want to fulfill your wishes, Mother Suu,” wrote one female university student in Yangon. “We will work hard to fulfill our obligations. Be healthy and love you, Mom.”

Other comments included, “We will always support you;” “Mother Suu’s words are encouraging;” and, “Long may she live.” Myanmar’s confirmed COVID-19 cases have so far been very low, but so has testing. (Photo by Yuichi Nitta)

Myanmar began a transition toward civilian rule in 2011 without Suu Kyi’s National League for Democracy represented in parliament since the party had not participated in an earlier general election. The NLD won by a landslide in 2015.

The Nobel peace prize laureate in 1991, Suu Kyi’s triumph at the polls aroused great expectations in the international community. These were largely dashed in 2017 after a ferocious military offensive in August caused over 730,000 Rohingya, a Muslim minority group, to flee into neighboring Bangladesh.

Yanghee Lee, until April the United Nations’ special rapporteur on Myanmar, described Suu Kyi as “utterly disappointing” during an interview with Al Jazeera, a television network based in Doha.

“We all knew that she was put on a pedestal, or portrayed as the icon of democracy and human rights, but ever since the NLD has taken office, and ever since she took the office of the state counsellor, all of her actions and her words, statements point otherwise,” said Lee.

Suu Kyi remains a special figure to her people, however, enjoying a hallowed status quite different to political leaders in most countries. Appearing in January at the International Court of Justice (ICJ) at The Hague in the Netherlands, Suu Kyi defended Myanmar’s treatment of the Rohingya, and rebuffed allegations of attempted genocide by her country’s security forces.

According to the ICJ, the Myanmar government submitted a report to it on Friday in response to the court’s order in January that “provisional measures” be put in place to protect Rohingya still in Rakhine state in western Myanmar.

President Win Myint’s office issued various directives in April to the military and regional government. Their instructions were to protect Rohingya from violence and hate speech, and to preserve any evidence of crimes against the minority.

The carefully measured defense of her homeland “Mother Suu” mounted at The Hague played well in Myanmar. She remains much revered for her personal sacrifices since 1988 — including long spells of house arrest — to bring about democracy. That popularity provides a political counterweight to the still powerful military as the NLD maneuvers for a second term in office.

Myanmar appears to be less affected by COVID-19 than some of its neighbors. As of May 19, only 191 cases and six deaths had been reported. 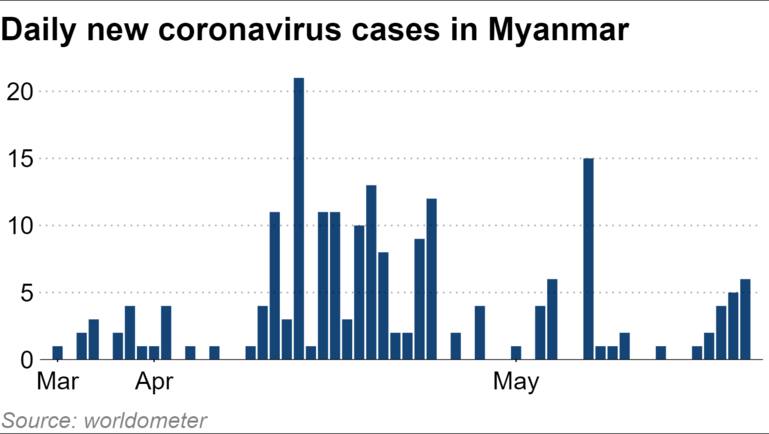 Economic repercussions are already more certain, however, particularly in the textiles sector, which produces 25% of Myanmar’s exports and provides some 500,000 jobs.

The growing tourism industry has gone on hold indefinitely. There were some 1.9 million foreign arrivals in 2019, a 70% increase from five years earlier.

In April, the International Monetary Fund lowered its growth forecast for Myanmar in 2020 to 1.8% from the 6.3% previously projected. 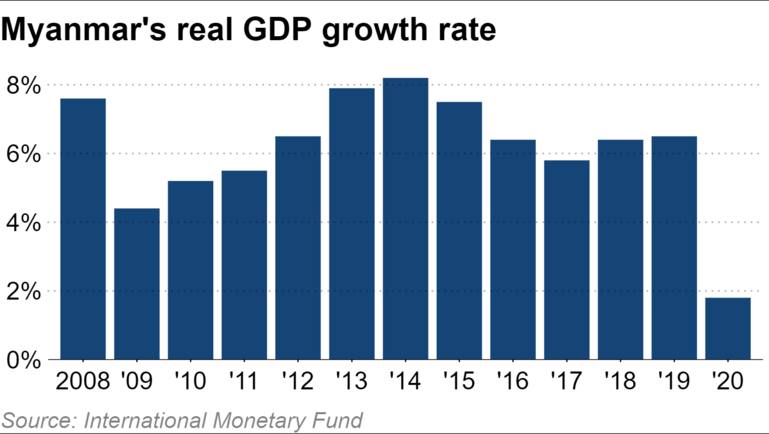 But there is praise to be found on the streets of Yangon, Myanmar’s largest city and former capital, for the official handling of the pandemic. “The government is doing its best to prevent the virus spreading and to support the public,” Tin Htoo Aung, a 49-year-old street food vendor, told Nikkei. That said, his daily sales are down to 5,000 kyats ($3.5) – a third of normal.

Many people see in Suu Kyi an idealized leader with traditional virtues. “The people’s image of an ideal ruler evolved during the dynasty that ended in the 19th century,” Kei Nemoto, a history professor at Tokyo’s Sophia University specializing in Myanmar’s modern history, told Nikkei.

“Aung San Suu Kyi is incredibly popular, especially among the Burman majority,” Richard Horsey, a Yangon-based political analyst, told Nikkei. “People may blame the government for not responding well, but that does not necessarily mean that people blame Aung San Suu Kyi. She is loved and adored in an emotional way.” 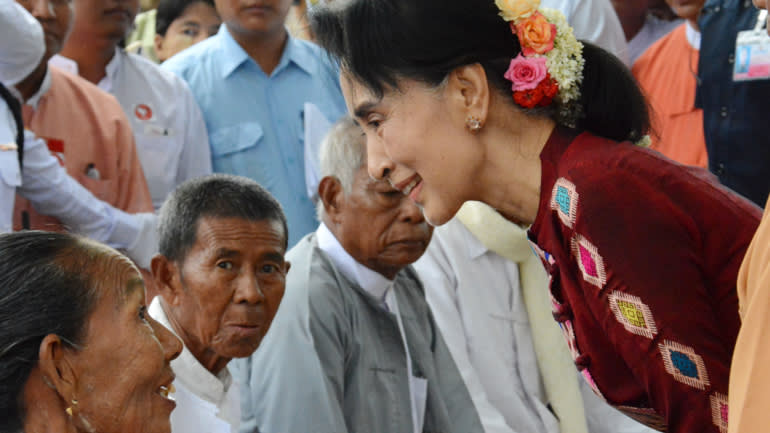 Prior to the COVID-19 pandemic, Suu Kyi had been traveling in upcountry areas to shore up political support ahead of November’s scheduled elections. (Photo by Yuichi Nitta)

A general election is due in November, and the election commission at this juncture expects polling to go ahead as planned.

Two elections have so far been held under a military-drafted constitution adopted in 2008. The NLD did not participate in the first in 2010, enabling the unchallenged military-backed Union Solidarity and Development Party (USDP) to win. The NLD completely trounced the USDP in 2015.

The NLD must still win two-thirds of the seats being contested to secure a parliamentary majority, since 25% of the legislature is reserved for serving military officers who answer to Senior General Min Aung Hlaing, the commander in chief of the armed forces. The constitution can only be revised with the vote of 75% of the members of the parliament, which effectively gives the military a veto.

Most observers expect the NLD to remain the largest party, but with fewer seats. Given the failure of peace talks in minority areas over the past four years, a number of ethnic-based parties are expected to make inroads against the NLD. Numerous ethnic minorities together add up to about 30% of the country’s population, and they have been discouraged by the elected government’s failure to bring peace.

Suu Kyi has tried to galvanize her position for a second term with efforts to amend the constitution and negotiate with armed ethnic groups, many of whom have been at war with the central government since soon after independence from Britain in 1948.

Ethnic minority parties that campaigned separately in the 2015 election are this time forming united fronts in troubled but strategic areas, such as Kachin, Mon and Karen states. If these parties win seats, they could end up in control of casting votes that will force the NLD into more complicated coalition arrangements.

In a March 2019 survey by the People’s Alliance for Credible Elections, 39% of respondents in areas with a large Burman population chose the NLD as the “political party best representing” their interests. In states with stronger minority presences, only 18% of respondents felt the same way about the NLD. Clouding the picture, many of those surveyed remained undecided.

Suu Kyi has a number of other issues to address. She will be 75 in June, and has not identified a successor. When challenged on this issue by Nikkei last year, Suu Kyi was evasive. “In our party, we have a very fixed hierarchy, and we hope this will be implemented,” she said without mentioning anyone. Some — including a number of NLD members — fear the party would disintegrate without her.

Possible successors include President Win Myint, 68 who also serves as the vice-chair of the NLD, but the spotlight has always remained firmly fixed on Suu Kyi.

“Suu Kyi cannot decide to confront the military because of concerns that nobody but her can lead the democratic government,” said Nemoto.

Another major issue is the balance of power between the military and civilian government — the latter does not control the former.

Senior General Min Aung Hlaing has been commander in chief since 2011, and witnessed the nominal transition to civilian rule. He is meant to step down in July 2021 when he reaches the retirement age of 65. Some political analysts have speculated that he might then seek to enter politics as Myanmar’s president. There is speculation that President Win Myint (left) might one day be succeeded by Senior General Min Aung Hlaing (right), who is due to retire next year as commander in chief.  (Source photos by AFP/Jiji and Reuters)

Nobody knows if the military might agree to a reduction in its parliamentary block to help bring this about, or whether it intends to simply lock down until the end of the Suu Kyi era.

Another issue that Suu Kyi herself might have difficulty identifying is the lack of criticism she receives. Politicians and the media generally refrain from pointing out her shortcomings.

“The difficulty of criticizing her in public is unfavorable for democracy,” said Nemoto.

Democracy such as it is in Myanmar today hinges largely on public respect and affection for Suu Kyi personally. The main challenge over the next five years may be nurturing an effective post-Suu Kyi generation of politicians who can take Myanmar’s flawed political system to a higher level.