TAIPEI — Taiwanese President Tsai Ing-wen will start her second and final term on Wednesday in a very different world to when she first came to power four years ago.

The economic challenges are huge, as the export-oriented economy has to contend with a global recession caused by the coronavirus pandemic. She is also facing an ever more belligerent China, which is looking to further squeeze Taiwan’s international presence.

Her inauguration comes just days after Taiwan was excluded from the World Health Organization’s annual assembly under pressure from China. This is despite the island’s success in controlling the outbreak — it has recorded more than 30 straight days of zero local infections and has suffered much fewer infections and deaths than neighbors such as Japan and South Korea.

Tsai’s administration has sustained a record high approval rate of 60% since her landslide election win in January, according to polls by TVBS. Taiwan has become the first to allow spectators at professional baseball games, and the government is considering further loosening social distancing rules.

Taiwan, praised internationally for its handling of the crisis, had won backing for a proposed vote on its inclusion at the WHO meeting from 14 of its formal diplomatic allies, and eight nations including the U.S. and Japan.

But on Monday, Taiwan dropped its bid to be an observer at the WHO’s meeting, blaming Beijing’s “two-faced behavior.” China has long claimed the self-governed island as part of its territory and objects to any Taiwanese official participation in international organizations and events.

Taiwan’s President Tsai Ing-wen walks past an attendant during her first inauguration ceremony in Taipei on May 20, 2016.

Former Foreign Minister Frederick Chien, who served in the government from 1962 to 2005, said last week that cross-strait policy should be a higher priority than diplomacy with other countries.

“Diplomacy is too cruel. Even if you think you are successful in relations with other countries, they can still easily switch stance when China is not happy,” Chien said at a panel discussion. “On the other hand, bad handling of cross-strait policy could lead to an extremely hard life for people.”

Relations with China, its largest trading partner, have deteriorated since Beijing-skeptic Tsai came to power in May 2016.

Beijing has launched a ferocious campaign to isolate Taiwan, luring seven countries to cut ties with the island in the past four years. Among its other efforts, China has sought to hurt Taiwan’s tourist industry by preventing individual citizens from getting travel visas to the island since last July. It recently suspended the admission of Chinese students to Taiwan, citing not only coronavirus risks, but also worsening cross-strait relations.

On the other hand, relations between the U.S. and Taiwan have continued to improve under the administration of President Donald Trump as Washington wrestles with Beijing for superpower status.

Trump has signed the Taiwan Travel Act to increase high-level official visits between the two and the Taiwan Allies International Protection and Enhancement Initiative (TAIPEI) Act to strengthen the island’s diplomatic relations with other countries in the Indo-Pacific region. More recently, Secretary of State Mike Pompeo publicly led a #TweetForTaiwan campaign, urging all nations to support Taiwan’s bid “to have a proper role” in WHO’s annual assembly.

“President Trump exceeded expectations and has clearly been the best U.S. president for Taipei since de-recognition in 1979,” Sean King, a scholar at the University of Notre Dame Liu Institute for Asia & Asian Affairs, told Nikkei Asian Review.

“I wouldn’t expect a President Biden to be anti-Taiwan but it’s hard to imagine any U.S. president being stronger on Taiwan than President Trump’s so far been,” King said. 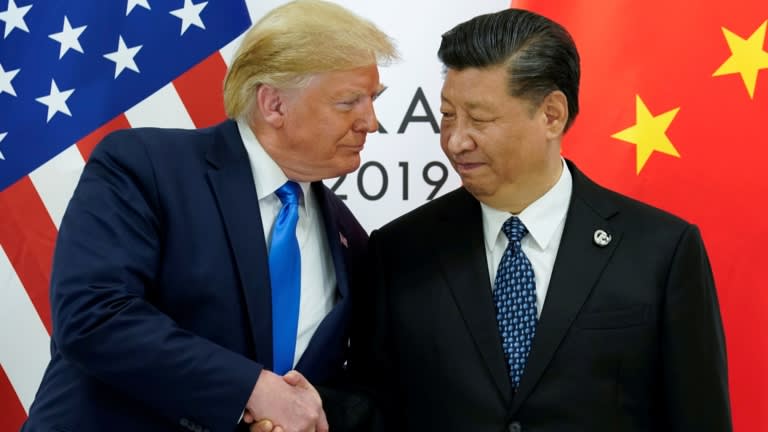 U.S. President Donald Trump meets with China’s President Xi Jinping at the start of their bilateral meeting at the G20 leaders summit in Osaka, Japan, in June 2019.

In 2018, Tsai and her Democratic Progressive Party suffered a crushing defeat in local elections as her economic policies and labor reforms failed to win wide support among the public. This led her to resign as head of the party to take responsibility.

Ironically, it was Chinese President Xi Jinping who helped her on her way to secure the highest number of votes ever in a presidential election.

Xi ramped up the rhetoric against Taiwan in a speech at the start of 2019, saying he would not rule out the use of force to take the island. This, combined with the impact of the Hong Kong pro-democracy protests, allowed Tsai to promote herself as the defender of young and hard-earned democracy in her presidential campaign against Han Kuo-Yu from the China-friendly Kuomintang.

Tsai turned the trade war between Washington and Beijing into an opportunity to attract Taiwanese companies that had moved manufacturing to China to reinvest in the island. As of the end of December, more than 125 companies decided to shift part of their production back to Taiwan.

The combined pledged investment was as much as 700 billion New Taiwan dollars ($23.42 billion) last year, which Tsai touted as a major economic achievement of her presidency. 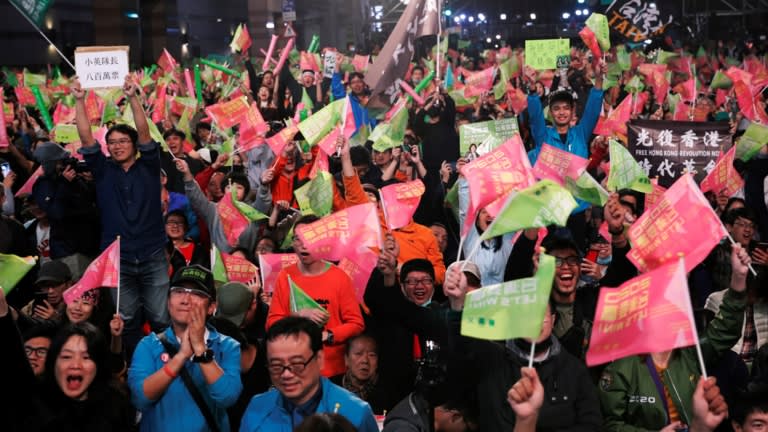 Supporters of Taiwan President Tsai Ing-wen celebrate her election victory at a rally outside the Democratic Progressive Party headquarters in Taipei on January 11.

The unexpected pandemic, however, is still a massive challenge for Taiwan’s economy.

The International Monetary Fund recently warned a possible further cut to global economic growth this year after it in April projected a 3% decline for the global economy — the steepest downturn since the Great Depression in the 1930s. The economies of China and the U.S., Taiwan’s biggest export markets, shrank 6.8% and 4.8%, respectively, in the first quarter from a year earlier.

As of May 8, there was a record-high of more than 1,000 companies in Taiwan that reported they had adopted unpaid leave programs, with nearly 19,000 employees affected. Big tech companies such as Taiwan Semiconductor Manufacturing, the world’s largest contract chipmaker, Taiwan’s leading power and thermal solutions provider Delta Electronics, and chip packaging and testing provider ASE Holding all have refrained from providing business guidance for the whole year.

In the meantime, many Taiwanese companies, caught between Washington and Beijing and facing disruption from the coronavirus, are continuing to shoulder the costs of diversifying production from China.

“In the post-virus era, a key challenge for Taiwan’s government will be whether policymaking and budgetary resources focus on where domestic and international politics intersect, or on economic growth,” Ross Darrell Feingold, a political risk analyst who has over 20 years’ experience advising clients on political risk and doing business in Taiwan, told Nikkei.

On top of the economic conundrum, Taiwan will also have to continue to compete against Southeast Asian countries because diversifying from China has become more common in supply chains, Feingold said.

“Although Taiwan is attractive for many reasons, other countries in Asia such as Indonesia, Malaysia, and Vietnam have lower costs, more land, and trade agreement participation to offer,” he said. “They will generally welcome Chinese companies who relocate as part of larger supply chains, which Taiwan for many reasons cannot do.”