TOKYO — A year has passed since Huawei Technologies was put on a black list by the U.S. government that banned American companies from selling to the Chinese telecoms group.

Nikkei, together with Tokyo teardown specialist Fomalhaut Techno Solutions, took apart Huawei’s flagship model, the Mate 30, to analyze the parts that have gone into the Chinese electronics maker’s top-of-the-range smartphone. Mate 30, which is compatible with fifth-generation networks, has been launched in several countries since the third quarter of last year.

Nikkei and Fomalhaut identified the origin of each component in Mate 30 and pegged their prices to market rates.

At a glance, parts made in China now form 42% of the total value of components, up from about 25% when Huawei was still able to buy from U.S. companies. American-made parts now represent only 1% of the total components value in Mate 30, down sharply from about 11%.

They found that the Chinese components used in this model was 16.5 percentage points higher than in Mate 20 Pro, which was launched before the U.S. sanctions and compatible with 4G mobile networks.

These figures suggest Huawei was forced to significantly shift suppliers over the year. Its own development of semiconductors and other crucial components for smartphones has also advanced over that time.

Before the sanctions, Huawei already used semiconductors developed by its subsidiary HiSilicon in its phones. HiSilicon has now moved into developing semiconductors for 5G models. This shows that Huawei now has the capability to develop its own parts and has moved away from U.S. manufacturer Skyworks Solutions which made chips for its last model.

On a broader scale, Huawei’s new capability bodes well for China’s ambitions to cut reliance on foreign suppliers. Huawei has overcome the obstacles in designing chips that can handle the reception and transmission of radio waves in 5G smartphones, which makes high-speed communication possible. 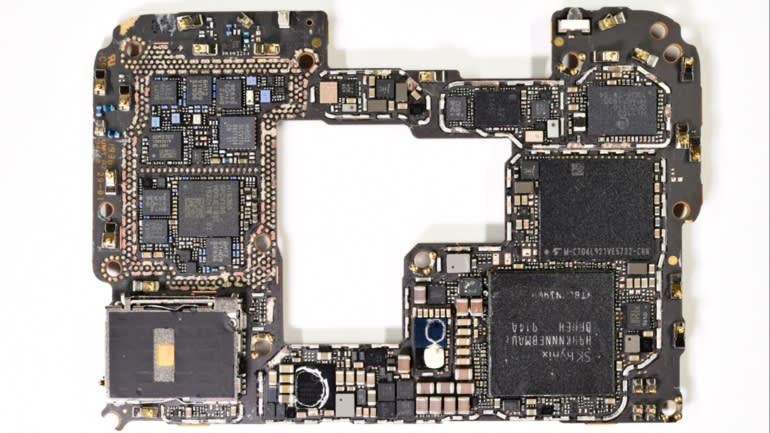 Huawei’s parts development has advanced over the year, and it is noticeable that the company has significantly increased its ability to supply itself. (Photo courtesy of Fomalhaut Techno Solutions)

This also gives Huawei an edge over its domestic rivals. Xiaomi, the fourth largest smartphone maker in the world, has been working on chips for its smartphones. But its latest models do not yet contain any chip the company has developed itself.

Xiaomi “had no choice but to continue using Qualcomm chips” for its new 5G smartphones, according to Hideki Maeno, consulting director at Omdia Japan, the Japanese arm of British research company Omdia.

Qualcomm supplies almost all of the chips Xiaomi uses in its 5G smartphones. To be sure, Huawei also said in March that it hoped to still be able to use U.S. suppliers and that despite the sanctions, the company spent 70% more with U.S. suppliers in 2019 than a year ago, according to an article by the Financial Times.

U.S. manufacturers also provide many other parts used in Xiaomi phones, accounting for 38% of the Chinese maker’s 5G smartphone components, 12 percentage points higher than those used in its 4G devices. This is also the case for other Chinese phone makers such as Oppo and Vivo.

Huawei stands out among Chinese smartphone makers in terms of domestic content. Yet, despite having built a supply chain that is less dependent on U.S. companies, it has still a long way to go in developing a competitive operation system and other software.

Huawei has traditionally used the Android open-source operating system provided by Google. While Huawei can still use Android, other Google applications are subject to the U.S. sanctions and not available for Chinese makers. That means such popular apps as Gmail, Google Search and YouTube cannot be installed in Huawei’s 5G smartphones.

Huawei is racing to develop its own OS, dubbed “Hongmeng.” But the company will face huge obstacles in its efforts to expand global sales of its 5G smartphones due to the lack of Google apps.

Despite its strategy of developing both hardware and software for its smartphones, Huawei will no doubt be eager to see the U.S. sanctions lifted to pave the way for its phones to carry popular Google apps.