TOKYO — For a journalist covering the secretive world of Chinese politics, the annual session of the National People’s Congress, China’s parliament, is a treasure trove of information.

It is a precious opportunity to see all of China’s leaders in one setting. It is not every day that a reporter gets to see the facial expressions of the leaders over an extended period of time and observe how politicians smile at each other, shake hands or ignore one another.

Intelligence officers covering North Korea, for instance, look to see who is deferring to whom, to understand the power hierarchy in Pyongyang.

The NPC offers a glimpse into who is truly close to President Xi Jinping. There was no better example of this than when Wang Qishan, No. 6 in the Chinese Communist Party’s pecking order, casually walked up to Xi during the 2016 session and patted No. 1 on the back.

This year’s parliamentary session, which will open on Friday after a two and a half month delay, will be held in a highly unusual way. It has been shortened, and there will likely be fewer news conferences. Furthermore, with many meetings held via video link, it will be held in a virtual world.

This photo from 2016 captures the close relationship Wang Qishan has with President Xi Jinping. (Photo by Akira Kodaka)

Analysts had expected this to be Xi’s big moment to proudly declare victory in the “people’s war” against the coronavirus. That no longer seems to be the case.

Instead, the session, which is often dubbed a “rubber-stamp” parliament that confirms everything decided by the party, may be just that.

Journalists, watching through a screen, will probably not acquire much insight. And one person is likely to dominate the discussion. He won’t even be there.

“The lead role of the NPC will be played by Donald Trump,” one Chinese businessperson said. “His presence might even end China’s long-standing ‘planned economy’ once and for all.”

This source said Trump’s unpredictable statements and actions are limiting what the NPC can do in terms of setting economic targets.

Every year in March, on the first day of the parliamentary session, China unveils its annual economic growth targets. The government then operates its policies in accordance with the goals and undoubtedly achieves them, at least numerically.

These are remnants of the socialist planned-economy era, even though China has now transitioned to a market economy.

As for last year, the growth target was set between 6% and 6.5%, and lo and behold, despite the bruising trade war with the U.S., China clocked in at 6.1% growth. Reporters seen at the National People’s Congress last year: The Great Hall of the People in Beijing will look quite different this year. (Photo by Taro Yokozawa)

A repeat performance will not be so easy.

Before the coronavirus outbreak, China had seen the upper 5% range as the minimum target growth rate for this year. But China now finds it difficult to set a specific annual target.

The Chinese economy plunged by 6.8% in the January-March quarter from a year earlier, marking the first negative growth since quarterly records began in 1992.

China could set a relatively high growth target in the report. But that would be risky. If the target is not achieved eventually, Xi and the leadership team could be held accountable.

China in the past has not hesitated to inflate figures to achieve growth targets. But this planned-economy practice might be coming to an end.

There are two reasons for this. One is the new coronavirus. The other is Trump.

The virus could come back in second and third waves; nobody knows for sure. Trump’s attitude toward China is equally unpredictable; nobody knows how that will manifest itself, either.

This uncertainty will remain at least until November, when Trump is up for reelection. By then, less than two months will remain in the year, and not much will be possible in terms of China reaching its growth targets. 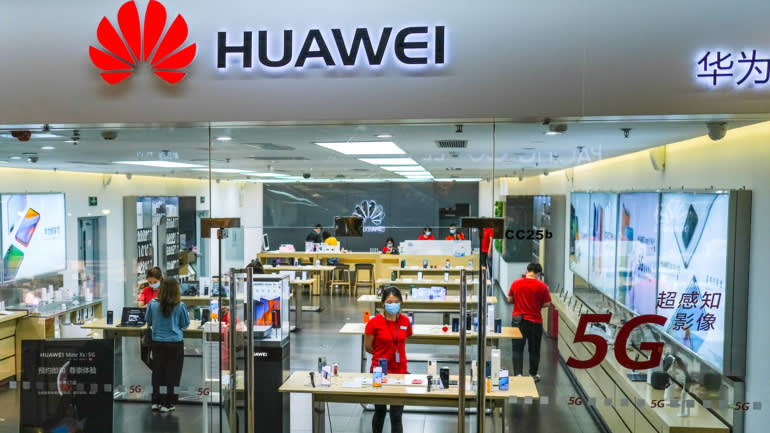 Huawei, which is taking global strides with its 5G equipment, finds itself in the crossfire of the U.S.-China battle for technological supremacy.

In the latest development, the U.S. Department of Commerce announced, in effect, a trade ban on Huawei, the Chinese telecommunication equipment provider that is fast enlarging its global footprint.

Huawei is the world’s second-biggest smartphone maker, and the ban could impact the development of its next-generation 5G network devices.

Ultrafast fifth-generation communication services form the backbone of China’s future economic measures that are to be discussed at the parliamentary session.

5G is also related to the controversial “Made in China 2025” initiative. While the initiative had taken a back seat after being singled out by the U.S. as a symbol of China’s ambitions during the trade war, there is talk in China of gradually reviving some related projects.

How China will cushion the economic impact from the coronavirus remains unclear.

Thirteen provinces and municipalities such as Beijing and Hebei Province have unveiled new rounds of infrastructure investment projects. Chinese media reports say these projects are worth 34 trillion yuan ($4.8 trillion). The amount appears to exceed the total amount of U.S. economic measures.

But the headline figure is somewhat cosmetic. The sum is to be invested over multiple years; it is not an immediate injection.

Meanwhile, the Chinese government is not planning any cash handouts to households.

It also has to consider the 8.5 million or so university students who will graduate this summer. That number swells to more than 10 million when students at vocational and other schools are counted. If many cannot secure jobs, social unrest could ensue. Chinese President Xi Jinping took the global stage earlier this week at the World Health Organization’s annual meeting, which was held virtually for the first time.

China today is under global pressure for not being able to halt the coronavirus pandemic. That pressure surfaced at the annual meeting of the World Health Organization this week.

At the opening ceremony, Xi delivered a speech in which he stressed China had taken appropriate anti-virus measures at the outset of the outbreak.

At the same time, Xi also accepted the launch of an international investigation, saying, “China supports the idea of a comprehensive review of the global response to COVID-19 after it is brought under control to sum up experience and address deficiencies.”

China successfully prevented Taiwan from participating in the annual WHO meeting as an observer. But it remains to be seen whether many countries, including the U.S. under Trump, will accept China’s stance.

Back in Beijing for this year’s parliamentary session, delegates from various parts of the country who did not arrive in the capital two weeks ahead of time will not be allowed to attend. Attendees in waiting, meanwhile, are being tested every time they enter their hotels or other accommodations.

Traditionally, about 3,000 deputies to the National People’s Congress crowd into the Great Hall of the People in Beijing. According to Chinese media, this year’s session has been reduced to several hundred attendees.

There will also be significantly fewer news conferences.

It will be a meeting in fog. It will also be mostly virtual, which is fitting considering the “lead role” that the U.S. president will play.

Katsuji Nakazawa is a Tokyo-based senior staff writer and editorial writer at Nikkei. He has spent seven years in China as a correspondent and later as China bureau chief. He is the 2014 recipient of the Vaughn-Ueda International Journalist prize for international reporting.