SINGAPORE — Cambodia, Laos, Myanmar and Vietnam have detected far fewer coronavirus cases than their more advanced Southeast Asian neighbors, but their economies are taking a beating all the same, potentially forcing a rethink of their development models down the road.

Analysts at Maybank Kim Eng expect the growth rate for the foursome, sometimes abbreviated as CLMV, to be more than halved this year, to 3% from 6.9% in 2019. Some experts warn that these governments may require international assistance to weather the crisis, even though their collective virus infections number in the hundreds versus tens of thousands across the bloc’s five largest economies — Singapore, Indonesia, Malaysia, the Philippines and Thailand.

“The economic impact will be significantly negative in the first half of 2020, with tourism and hospitality bearing the brunt as visitor arrivals plunge,” they added. “Manufacturing and exports face a double whammy from collapsing global demand and supply chain disruptions.”

In the past half-decade, the CLMV grouping has posted growth of 6% annually, boosting the Association of Southeast Asian Nations’ overall figures and outpacing the 4.6% expansion of the big five. But this year, Maybank Kim Eng sees Vietnam growing just 3.6%, down from 7%, while others are likely to fare worse: 0.5% for Cambodia, versus 7% last year; 2% for Myanmar, falling from 6.8%; and 2.4% for Laos, declining from 4.7%.

Maybank does expect a rebound in 2021. But for 2020, the International Monetary Fund’s CLMV projections are even bleaker. In April the fund projected Vietnam’s economy will expand just 2.7%, with Myanmar growing 1.8%, Laos 0.7%, and Cambodia shrinking by 1.6%.

In all, the IMF thinks Southeast Asia is in for a 0.7% contraction this year.

CLMV “are very small economies, they depend quite significantly on exports of goods and services,” CIMB Private Banking Economist Song Seng Wun told Nikkei. “So if we look at, say, the Cambodian clothing industry — [it is] badly affected by the slump in demand in the rest of the world.”

Like their bigger counterparts, the governments are doing what they can to shore up their economies. Vietnam in early April set aside 180 trillion dong ($7.78 billion) for tax deductions. Cambodia and Myanmar have offered tax exemptions for businesses in tourism-related sectors. And Laos granted corporate income tax breaks for micro enterprises.

But these efforts may not be enough, CIMB’s Song warned.

Low wages have attracted global manufacturers to the quartet, including producers of apparel, automobiles and electronic appliances. But disruptions to these industries have taken a toll.

In the automotive sector, macro analysis outfit Fitch Solutions cautioned in February that vehicle production in ASEAN faced downside risks as COVID-19 spread. “Myanmar is the ASEAN region’s most exposed automotive-producing country to work stoppages in China,” Fitch said, noting that the country had the bloc’s largest share of Chinese vehicle component imports at 28%, followed by Vietnam at 16.5%.

At the same time, the pandemic has hurt auto demand within Vietnam, according to Rajiv Biswas, APAC chief economist at IHS Markit. “In the first four months of 2020, sales of locally produced vehicles in Vietnam were down by 35%” year on year, he said. With “some recovery” expected in the second half, Biswas said the annual forecast for new light-vehicle sales points to a 15.6% decline to about 305,000 units. 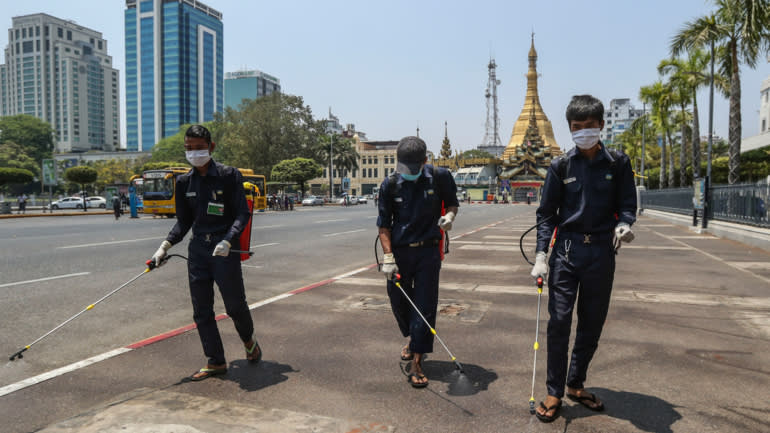 Members of the Yangon City and Development Committee spray disinfectant on a road near Sule Pagoda. Myanmar’s case count remains below 200.

Besides auto parts, China is also a major source of tourists for the subregion. Maybank’s Liu and Chua observed that Chinese exposure made up somewhere between 19.2% to 32% of total tourist arrivals for the CLMV countries in 2018.

“Slowing tourist arrivals, especially from China, will have a significant impact on ASEAN frontier economies,” Liu and Chua said. “Cambodia is the most reliant on tourism, with tourism and transport-related sectors accounting up to 12.3% of GDP, followed by Myanmar — 11.2% — and Vietnam — 6.6%.”

For Laos, the economists said Thailand’s economic pullback as a result of the pandemic will weigh on the country. “Thailand is Laos’ largest exports market, accounting for 41.7% of its exports in 2019,” they noted.

James Richman, chief executive of private asset management firm JJ Richman, suggested that even some of the most highly regarded and developed economies have been challenged in this crisis. “No countries were spared during the pandemic,” he told Nikkei, saying the effects are “perhaps likely to hammer down the economies of far more vulnerable and less developed countries.”

Ultimately, the result may be a conscious effort by governments in the region to restructure their economies. A Fitch report issued this month suggested they will seek to become more resilient and less reliant on certain sectors.

“For instance, [for] economies such as Thailand and Cambodia, which are heavily reliant on tourism for growth, the collapse in air travel due to COVID-19 will likely prompt the government to shift its economic focus into other sectors such as infrastructure and manufacturing.”

IHS Markit’s Biswas said that “CLMV countries are also likely to take measures to reduce their vulnerability to global supply disruptions for critical [products] such as medical equipment and pharmaceuticals.”

Yet he sees potential benefits for these up-and-coming economies as well, as the rest of the world looks to shore up supply chains too.

“The global pandemic has highlighted the vulnerability of manufacturing supply chains to production disruptions in key global manufacturing hubs such as China and India,” Biswas said. “This is likely to accelerate efforts by multinationals to further diversify their supply chains geographically, with Vietnam likely to be an important winner over the medium-term.

“Myanmar is still a relatively small manufacturing hub,” he added, “but over the next decade” it could emerge as a new base for making textiles and electrical products.