TOKYO — Monday was President Xi Jinping’s 67th birthday. It turned out to be an important day for Chinese politics.

Rumors were already swirling from the previous day among some Chinese Communist Party members that an important announcement was imminent. It turned out to be a birthday present that left experts talking nonstop.

On the front page of the June 15 Study Times, an official publication of the Central Party School, was a full-page story with a big headline calling for making “Xi Jinping Thought” — the leader’s eponymous political ideology — the “Marxism of the 21st century.”

The article was written by He Yiting, the executive vice president of the Central Party School. He is a close aide to Xi and played an important role in compiling Xi’s political theory, which was enshrined in the party’s constitution at its 2017 national congress.

He is not merely currying favor with Xi or playing with words. A great ambition is hidden.

In essence, it is an attempt to crown Xi’s eponymous ideology as a once-in-a-century philosophy that guides all of China and thereby makes it more important than “Mao Zedong Thought,” the ideology of the People’s Republic of China’s founding father and revolutionary hero.

Xi is shown on the screen at the Beijing Exhibition Center in 2019. (Photo by Ken Kobayashi)

The proposal is so grandiose that even Karl Marx would be surprised in the other world. In the article, He Yiting makes an argument that today’s socialism with Chinese characteristics has written “the most wonderful chapter of world socialism in 500 years.”

Pointing to capitalism and socialism, He writes that “the world’s two ideologies, two doctrines and two systems are undergoing profound changes in favor of socialism.”

There are many implications in this. The fact that the article was published on Xi’s 67th birthday also has great meaning.

There is a long-standing unofficial party rule called “qi shang, ba xia,” which literally means “seven up, eight down.” It allows those who are aged 67 and younger to remain in key posts, but it requires those who are aged 68 and older to retire without assuming news posts.

Xi will be 68 next year. If he follows the retirement age rule obediently, he will not be reelected as Chinese president at the party’s next quinquennial national congress in 2022.

While Xi did succeed in revising the national constitution in March 2018 to scrap the limit of two five-year terms for Chinese presidents, there is a possibility some political forces will resist Xi’s retirement extension, citing the age rule.

Xi’s great power struggle will reach its first climax this summer. For Xi, this year’s party conclave at the summer resort town of Beidaihe holds the potential for danger: There is always the possibility of Xi failing to obtain the blessing of party elders.

But if Xi’s eponymous ideology were to be upgraded to “the guiding ideology of the 21st century” and enshrined in the party’s constitution as such at the 2022 national congress, the political landscape changes.

If enshrined, Xi’s ideology will become a deified, almighty guiding ideology. For Xi, who developed the ideology, it paves the way to be president-for-life.

But the fact that Xi’s camp has to go to such extremes to ensure his political survival hints that all is not set in stone. A recent political incident in Chongqing adds to suspicions.

Call it the curse of Chongqing. Once again the head of police for the midwestern Chinese city has fallen from power.

In an announcement on June 14, China’s anti-corruption authorities said Deng Huilin, deputy mayor of Chongqing and head of the municipality’s public security bureau, is under investigation on suspicion of “serious violations” of party discipline and law.

One after another, successive top-level public security officials in Chongqing have seen their political fortunes come to miserable ends.

Here are some past instances.

In 2007, Bo Xilai, the highly ambitious rival to later-President Xi Jinping arrived in Chongqing as the top official and soon embarked on a campaign to eradicate the local mafia.

He targeted Wen Qiang, who as the executive deputy head of Chongqing’s public security bureau and later head of its judicial bureau controlled the local police. Wen was identified as the city’s wirepuller and was eventually executed. After falling out with Bo, Wang sought refuge at a U.S. consulate general in the neighboring megacity of Chengdu. He is said to have been carrying large quantities of “state secrets” with him when he banged on the door of the U.S. mission.

Fast forward several years to when Sun Zhengcai served as Chongqing’s top official. Once tipped as a front-runner in the race to succeed Xi as China’s future top leader, Sun was purged ahead of the party’s national congress in 2017.

He Ting, who was serving as Chongqing’s public security bureau chief under Sun, was also accused of disciplinary violations and stripped of his party membership.

Over the past decade or so, Chongqing’s police chiefs were always embroiled in scandals involving the top official. Conversely, whenever Chongqing’s public security bureau chief was purged, a major incident involving the party secretary inevitably took place.

But Deng Huilin’s career path suggests this time will be different.

Before being transferred to Chongqing, Deng worked in Hubei Province at its public security division and then in Beijing at the party’s Central Political and Legal Affairs Commission.

He is a so-called parachute-style appointment, descending from the central government to the local government of a place he had no connection to.

Until moving to Chongqing, therefore, Deng had no direct connection with Chen Min’er, the municipality’s current top official and a close aide to Xi. 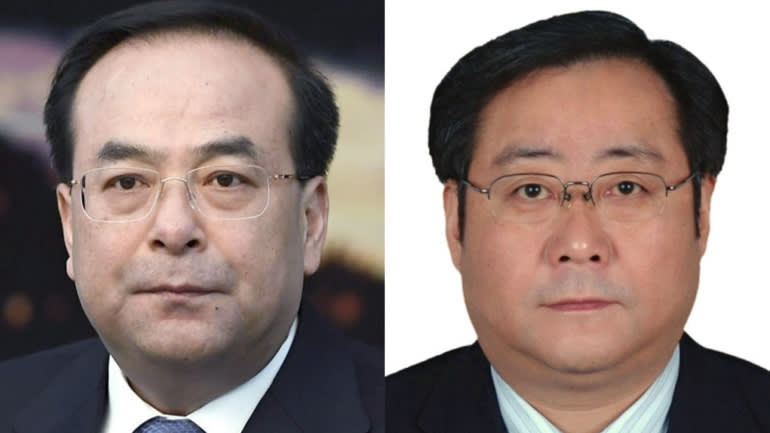 From left, Sun Zhengcai and He Ting

This means Deng is likely to have fallen from grace under different circumstances than the Bo-Wang and Sun-He duos, pairs who were implicated in and accused of crimes.

Deng’s investigation may be connected to Meng Jianzhu, a former Politburo member and the top law enforcement official who has since retired.

Deng served as Meng’s secretary in the past.

In April, another of Meng’s former secretaries was also placed under investigation. Sun Lijun was vice public security minister, and at 51, considered a promising next-generation leader in the public security and police forces.

Now that Sun and Deng have been placed under investigation, Meng’s future is a matter of interest. Meng belongs to the “Shanghai faction,” a group of people close to former Chinese President Jiang Zemin. It is a rival faction of Xi’s political group.

But why did Xi need to go after Chongqing’s public security bureau chief?

“Xi is in a fairly difficult situation as he faces a host of domestic political, economic and diplomatic issues,” one party source said. Just like Xi green lighted the investigations into Sun Lijun and former head of Interpol Meng Hongwei, the investigation into Deng, the source said, was “yet another preemptive move” to hold rival factions at bay “before things become too dangerous.”

Xi’s regime is not as rock-solid and stable as it appears from the outside.