Global cases have reached 7,085,894, according to Johns Hopkins University.

2:05 p.m. The number of bankruptcies in Japan dropped 55% to 314 in May from a year earlier, the smallest number in 56 years. But experts say the fall was likely an anomaly as many law firms and local courts may have reined in operations due to the pandemic.

1:50 p.m. Thailand reports two new coronavirus cases and no new deaths, bringing its total to 3,121 confirmed cases, of which 58 were fatalities. The two cases were quarantined Thai nationals returning from Saudi Arabia and the Netherlands. Thailand has recorded no new local transmission for 15 days in a row.

11:00 a.m. South Korea’s Hyundai Development has told creditors of Asiana Airlines it wants to reconsider the terms of its agreement to buy the troubled carrier due to “unexpected negative situations coming to light.” A consortium led by Hyundai Development agreed late last year to purchase Asiana Airlines for about 2.5 trillion won ($2.09 billion). 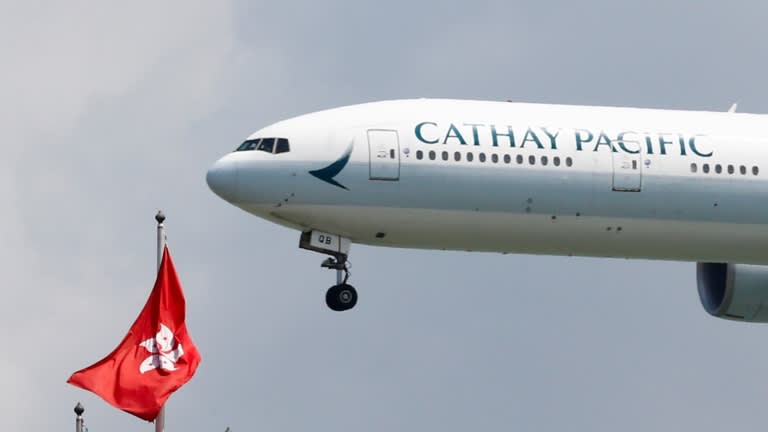 Ahead of a major announcement, Cathay Pacific Airways plus its major shareholders Swire Pacific and Air China halt the trading of their shares in Hong Kong.

10:20 a.m. Cathay Pacific Airways plus its major shareholders Swire Pacific and Air China halt the trading of their shares in Hong Kong pending announcements. Cathay has grounded most of its jetliners, flying only cargo and very few passenger flights to major destinations.

7:00 a.m. Brazil reports 679 new COVID-19 deaths and 15,654 additional confirmed cases on Monday, as controversy grew over the country’s official coronavirus data amid allegations of manipulation from a senior lawmaker. Brazil’s Health Ministry removed data from its website over the weekend and stopped releasing cumulative totals for coronavirus deaths and infections

6:30 a.m. More than 136,000 new coronavirus cases were reported worldwide on Sunday, the most in a single day, the World Health Organization says. “More than six months into the pandemic, this is not the time for any country to take its foot off the pedal,” WHO Director General Tedros Adhanom Ghebreyesus said. Nearly 75% of the cases were reported from 10 countries, mostly in the Americas and South Asia.

3:40 a.m. Travel on U.S. roads fell by 39.8% in April as coronavirus stay-at-home orders prompted tens of millions of Americans to work from home and avoid travel. The U.S. Transportation Department said U.S. motorists drove 112 billion fewer miles compared with April 2019, for a total of 169.6 billion miles. Traders on the floor of the New York Stock Exchange wear masks as the COVID-19 outbreak continues.

12:57 a.m. The coronavirus will cause global economic output to contract by 5.2% in 2020, the World Bank says, warning that its latest forecasts would be revised downward if uncertainty remains over the pandemic and lockdowns. The organization said that advanced economies are expected to shrink 7.0% in 2020, while emerging market economies will contract 2.5%, their first since aggregate data became available in 1960. On a per capita GDP basis, the global contraction will be the deepest since 1945-1946.

10:37 p.m. Japanese drugmakers Daiichi Sankyo and Nichi-Iko say they will work with the University of Tokyo to develop a potential inhalation treatment for the coronavirus.

6:00 p.m. China challenges U.S. Sen. Rick Scott to show evidence to prove that Beijing is trying to slow down or sabotage the development of a COVID-19 vaccine in Western countries. “[P]lease let him present the evidence. There’s no need to be shy,” Chinese Foreign Ministry spokeswoman Hua Chunying said at a daily briefing in response to the Republican senator’s comments to the BBC.

5:45 p.m. Indonesia reports 847 new infections, up from 672 yesterday, and 32 new deaths. That brings the total to 32,033 cases, including 1,883 deaths. Long lines appeared at commuter rail stations across Greater Jakarta as the capital began easing restrictions on movement and workplaces on Monday.

4:40 p.m. Pakistan has registered 2,067 deaths and 103,671 infections, prompting authorities to begin strict enforcement of safety measures. The country lifted its lockdown last month but promulgated protocols for the reopening of markets, industries and public transport — including mandatory wearing of masks and social distancing. “We directed administrations to crack down on places protocols are not being followed,” Pakistan’s planning minister said.

2:10 p.m. Thailand confirms seven new infections, with all of them found in quarantine, taking the country to two weeks without a local transmission. Thailand has reported 77 cases in the past 14 days, and all were contained after being imported from overseas.

1:00 p.m. New Zealand’s Prime Minister Jacinda Ardern says all coronavirus measures will be lifted, starting Tuesday, other than border closure restrictions, as the virus has been eliminated in the country.

11:30 a.m. Japan’s Nikkei Stock Average rises past the 23,000 mark for the first time in three and a half months on hopes of a quick economic recovery, buoyed by better-than-expected U.S. unemployment data. The benchmark index ended the morning session at 23,075.3, up 0.93% from the previous day’s close.

11:10 a.m. Global coronavirus cases have surpassed 7 million, with more than 400,000 deaths from COVID-19, according to Johns Hopkins University.

11:00 a.m. New Zealand has no known active cases of COVID-19 in the country for the first time since Feb. 28, the country’s Ministry of Health says. The last person being monitored for coronavirus has been released from isolation as he is free of symptoms.

10:23 a.m. South Korea confirms 38 new coronavirus cases, down from 57 the previous day. To date, there have been 11,814 infections and 273 deaths. The country reported more than 50 cases a day over the weekend, but the number dropped on Monday.

10:00 a.m. Vietnam reports two new coronavirus infections, both of which involved Vietnamese citizens returning from Mexico. Those travellers were quarantined on arrival. The country has gone 53 days without a domestically transmitted infection, and has a total of 331 cases with no deaths.

9:09 a.m. Japan’s economy shrank 2.2% at an annualized pace in January-March, the government announced on Monday, a milder decline than the preliminary estimate of a 3.4% contraction.

4:42 a.m. Chinese drugmaker Shanghai Junshi Biosciences has launched early-stage trials of a potential antibody therapy for the coronavirus in uninfected subjects, official newspaper Liberation Daily reports. The treatment is being developed in collaboration with Eli Lilly. Cemetery workers bury a man who died from COVID-19 in Breves, Brazil, on June 7. The country has the third-highest death toll from the virus, behind the U.S. and U.K.

2:30 a.m. The global death toll from the COVID-19 virus reached at least 400,000, according to Johns Hopkins University. The U.S. leads the world with nearly 110,000 confirmed virus-related deaths, followed by the U.K. and Brazil. At least 6.9 million people have been infected by the virus.

1:32 a.m. The approval rating of Japanese Prime Minister Shinzo Abe’s government sank 11 points from the previous month in June to 38% in a new Nikkei survey, matching the lowest level during his second stint in office. While Japan has logged relatively few coronavirus infections, the economic response has been criticized as too slow, especially the 100,000 yen ($930) cash payments to every resident.

12:15 a.m. U.S. Sen. Rick Scott accuses China of trying to sabotage coronavirus vaccine development by Western countries. “What I really believe is, whether England does it first or we do it first, we’re going to share,” he said. “Communist China, they’re not going to share.”

10:58 p.m. Gilead Sciences, maker of the potential COVID-19 treatment remdesivir, has been approached by U.K.-based AstraZeneca about a possible merger, Bloomberg News reported.

5:02 p.m. Malaysia will lift most coronavirus-related restrictions on businesses Wednesday, including a ban on interstate travel, after a nearly three-month lockdown, although international borders will remain closed. Prime Minister Muhyiddin Yassin announces in a televised address the outbreak is under control and Malaysia will begin a new recovery phase until Aug. 31.

4:03 p.m. Taiwan will further ease restrictions related to control of the coronavirus, the government says, as the island has kept the pandemic well in hand with only 6 active cases and no local transmission for 56 days.

12:23 p.m. China’s exports contracted in May as global coronavirus lockdowns continued to devastate demand, while a sharper-than-expected fall in imports pointed to mounting pressure on manufacturers as global growth stalled. Overseas shipments in May fell 3.3% from a year earlier, after a surprising 3.5% gain in April, customs data shows.

10:30 p.m. Potential coronavirus treatment Avigan is now expected to take until July at the earliest to complete a clinical trial, further delaying government approval in Japan, Nikkei has learned. A sharp decline in COVID-19 cases in Japan has made it difficult to secure enough patients for testing, according to people familiar with the matter.

4:38 p.m. India reports a record 9,887 new coronavirus cases in one day and overtakes Italy as the world’s sixth-biggest outbreak, two days before relaxing a lockdown with the reopening of malls, restaurants and places of worship.

1:49 p.m. Thailand reports two new coronavirus cases and no new deaths, taking its total confirmed cases to 3,104 and 58 deaths since the outbreak began in January. The two cases are men who returned from Russia and Kuwait and are in quarantine.

10:30 a.m. The group of 20 rich and emerging economies issues a statement saying it has pledged more than $21 billion to fight the coronavirus.

3:26 a.m. New York City has logged its first day of no COVID-19 deaths in roughly three months. The tally of zero was recorded on Wednesday, data from the Department of Health and Mental Hygiene shows.

2:30 a.m. China’s tourism ministry has advised the public to avoid travel to Australia, warning of racial discrimination and violence against the Chinese in connection with the coronavirus pandemic.