Global cases have reached 8,005,294, according to Johns Hopkins University.

2:25 p.m. Japan’s benchmark Nikkei Stock Average surges — at one point jumping over 1,000 points, or 4.7% — after the U.S. Federal Reserve’s decision to begin buying individual corporate bonds in a move to ease negative business impact from the coronavirus.

12:09 p.m. The Bank of Japan leaves its main policy tools unchanged after a two-day board meeting on Tuesday, as the central bank saw the need for more time to assess the impact of its credit easing in response to the coronavirus pandemic.

12:00 p.m. Beijing reports 27 new confirmed cases for Monday, taking the cumulative number of infections in the city’s current outbreak to 106. Authorities have imposed more restrictions to keep the virus from spreading to other provinces, banning outbound travel of high-risk people and suspending some transportation services out of the city.

11:30 a.m. Antibody tests suggest 0.1% of Tokyoites have been infected with the virus, health minister Katsunobu Kato says, as the government seeks to better grasp the scale of the pandemic’s spread in Japan. The rate is significantly lower than in other global population centers, such as New York state, 12.3%, and Stockholm, 7.3%.

10:25 a.m. New Zealand reports two new cases, both related to recent travel from the U.K. The country declared itself free of COVID-19 last week but warned new cases may emerge.

9:30 a.m. The U.S. and China will each allow four weekly flights between the two countries, the U.S. Transportation Department says, easing a standoff over travel restrictions. Following Chinese government approval, Delta Air Lines says it will resume passenger flights between Shanghai and Seattle next week, via Seoul, and once-a-week flights from Seattle and Detroit in July.

9:00 a.m. Global cases have surpassed 8 million, Johns Hopkins University says, as infections surge in Latin America, and with the U.S. and China grappling with their own outbreaks. The U.S.’s more than 2 million infections account for more than 25% of all reported cases, but the virus is spreading fast in Brazil, Peru and elsewhere in Latin America. 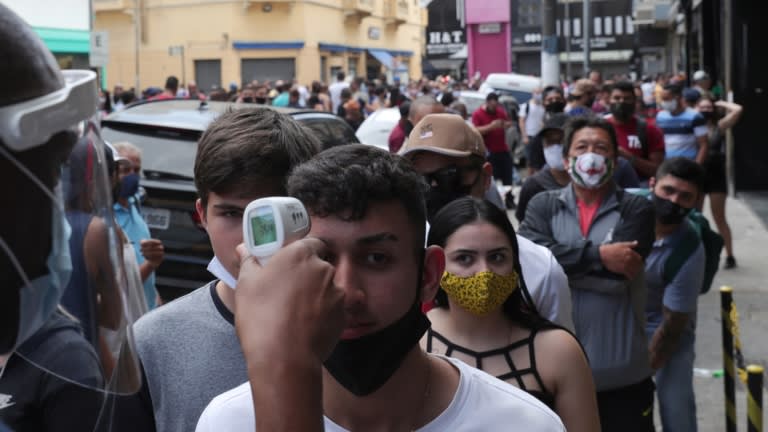 A man at the head of a line outside a popular mall in Sao Paulo, Brazil, on June 11 has his temperature taken as the shopping center reopens for the first time since the imposition of a quarantine.

4:58 a.m. Japan aims to have a new contact-tracing app co-developed by Microsoft available for download as early as this week.

2:19 a.m. The U.S. Food and Drug Administration revokes its emergency use authorization for hydroxychloroquine to treat COVID-19, the drug championed by President Donald Trump, reports Reuters.

1:40 a.m. Australia’s Qantas Airways says it is leaving its joint venture with Vietnam Airlines amid growing headwinds from the coronavirus outbreak.

12:45 a.m. The nearly 200-year-old London Zoo has reopened for the first time in almost three months, but will take in far fewer visitors than normal for the time being.

11:31 p.m. Japan’s health ministry says it has “mostly completed” distribution of reusable cloth masks to every household in the country, one of the early initiatives by Prime Minister Shinzo Abe’s to limit the impact of the coronavirus pandemic.

10:45 p.m. Singapore says it will proceed with plans to reopen most of its economy, allow stores to resume business Friday as the country further eases coronavirus restrictions.

10:30 p.m. U.S. stocks tumble at the opening bell after spikes in coronavirus infections were reported in parts of the country, as well as in China. The Dow Jones Industrial Average slumps around 600 points, or about 2%.

7:38 p.m. China’s Canton Import and Export Fair will take place online, without visitors. Nearly 26,000 exhibitors will display goods such as electrical appliances and food on a dedicated website. More than 8,000 will participate via live-streaming video. 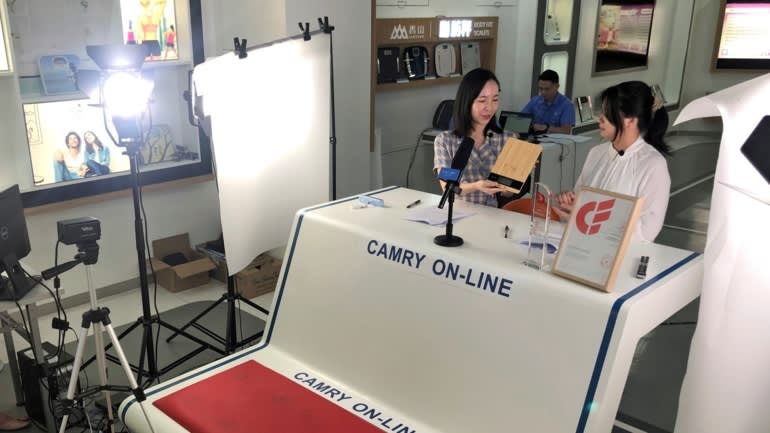 The Canton Import and Export Fair will take place entirely online, with exhibitors showing their wares on a dedicated website and participating by live-streaming video.

6:00 p.m. China is getting a propaganda boost from the “Black Lives Matter” protests and the pandemic woes in the U.S. Experts say the Chinese government is using nationalism to divert attention from its own economic problems.

3:16 p.m. Tokyo confirms 48 new infections on Monday, many of them tied to workers in nightlife districts, sources tell Nikkei, up from 47 cases a day earlier. A second straight day of nearly 50 infections has renewed concerns about a resurgence of the virus. 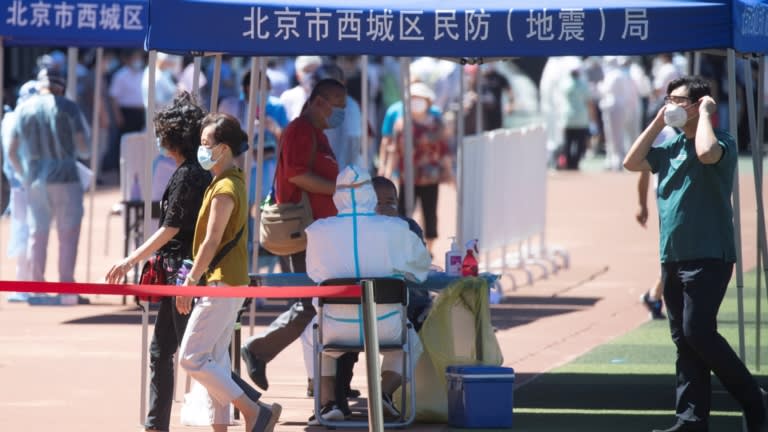 12:25 p.m. The Japanese government is looking to relax restrictions on travel to Vietnam at the end of June, Nikkei has learned. The trial project will begin with a chartered flight for up to 250 business travelers.

“Many leaders … have promoted the idea of making any vaccine a global public good, but that should continue to be promoted,” WHO director-general Tedros Adhanom Ghebreyesus tells a news conference.