SINGAPORE — Singapore on Tuesday downgraded its growth projection for this year to a range of -7% to -4%, from the previous forecast of -4% to -1%, suggesting prolonged economic damage from the coronavirus pandemic despite the phased business resumption starting next week.

The city-state the same day reported a 0.7% decline in its first-quarter gross domestic product.

“Outward-oriented sectors such as manufacturing, wholesale trade, and transportation and storage will be adversely affected by the sharper-than-expected slowdown in many of Singapore’s key markets, as well as more prolonged supply chain disruptions,” Gabriel Lim, permanent secretary at Singapore’s Ministry of Trade and Industry, told reporters during an online news conference.

He added that Singapore’s domestic economic activity has also been dampened due to workplace shutdowns. Sectors like construction and marine and offshore engineering have been “severely affected by manpower shortages due to the outbreak of infections among foreign workers,” especially those living in dormitories that had massive coronavirus outbreaks.

Singapore as of Monday had a total of 31,960 confirmed coronavirus cases — the highest in Southeast Asia — due to outbreaks in migrant worker dormitories. Twenty-three patients have died. The government, which has already allowed limited early reopenings, plans to allow more from June 2, but it is expected to take months for all business to resume.

As a small, trade-reliant economy, Singapore has been hit hard by the pandemic. The first-quarter result, which was better than the official estimate of a 2.2% contraction, marked the first negative growth since the 2008-2009 global financial crisis. It was also one of Southeast Asia’s weaker performances: Thailand’s economy shrank 1.8% in the first quarter, while Indonesia and Malaysia secured sluggish growth of 2.97% and 0.7%, respectively.

Singapore’s manufacturing sector grew 6.6% as it saw rising output in the pharmaceutical industry. But the services sector fell 2.4% in the first quarter. 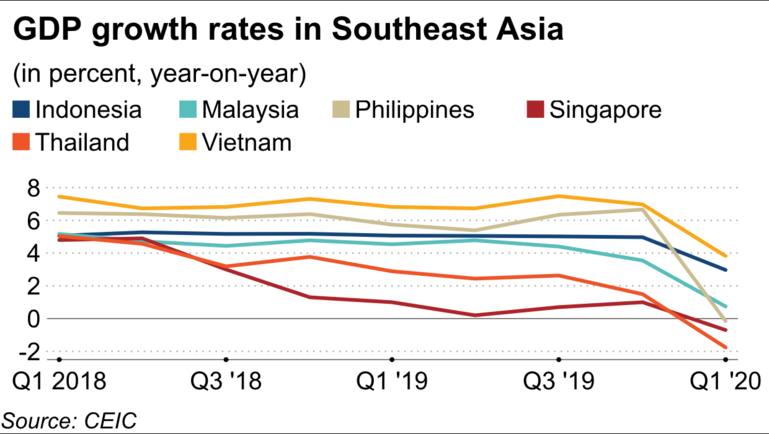 The city-state confirmed its first coronavirus infection in late January and gradually imposed restrictions on foreign visitors, choking the tourism sector. Business closures in China and other major trading partners also affected the city-state’s economy. From early April, as the virus burned through the dormitories, Singapore closed all nonessential workplaces and schools.

“The second quarter will be much worse,” Capital Economics economist Gareth Leather wrote in a report last Friday, citing the sweeping “circuit breaker” business shutdown that began in April. “What’s more,” he continued, “external demand has plummeted much further this quarter, which will weigh heavily on Singapore’s very open economy.”

Despite the reopening plans, the government is taking a cautious approach, hoping to avoid a new wave of infections like those seen in some countries that have eased restrictions. Unlike regional peers, retail stores and dine-in restaurants will remain shuttered in the first phase.

Resumption of cross-border travel will also be vital for reviving the economy. The borders are expected to reopen in phases, with priority given to essential business trips. The government has been discussing arrangements for freeing up business travel with a few countries, including South Korea and Australia, but the timing has yet to be announced.

With the pandemic’s economic effects dragging on, the government is expected to announce additional support measures for businesses in parliament on Tuesday afternoon. This would add to the roughly 60 billion Singapore dollars ($42 billion) of relief packages, including wage subsidies and cash handouts, that the government has already introduced.

Tue May 26 , 2020
The Nikkei Asian Review is tracking the spread of the new coronavirus that originated in the central Chinese city of Wuhan. Global cases have reached 5,453,784, according to Johns Hopkins University. The worldwide death toll has hit 345,886. To see how the disease has spread, view our virus tracker charts: […]